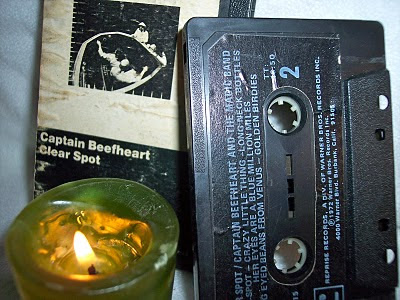 I was about ten years old when I innocently took a flyer on Clear Spot after I spotted it in a four-for-a-dollar cassette bin. The album changed by perception of "music." I was aware of the blues, but this baffling outsider music was something entirely different. It raised several questions.

Did the band sound like this on purpose? What's wrong with this "Captain Beefheart" guy? What color is his skin? Why would Reprise issue an album by this deranged blues man? Did I waste a quarter? What in the world is going on here, anyway?

The battered condition of the cassette indicates that I spent a lot of time seeking answers to those questions.

---
Grieves is perfect for Warped Tour.

(Original image by There Stands the Glass.)
Posted by Happy In Bag at 7:00 AM

Wow, a quarter...I had an older mentor that played me his copy of "Safe as Milk" and I quickly asked him to tape it for me. If I had heard this stuff before I was a teen I would be so different.