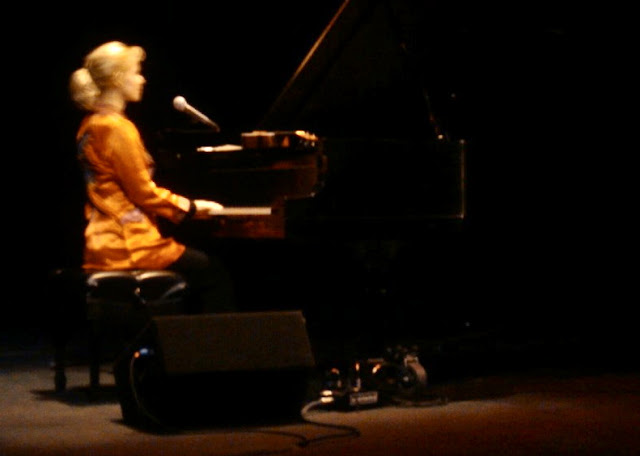 As about 5,000 of her contemporaries filed into Starlight Theatre for a concert by the Ben Folds Five on Friday evening, the similarly acerbic piano-based singer-songwriter Nellie McKay entertained about 300 senior citizens and a few dozen younger folks at Polsky Theatre.

Largely because she prefers Cole Porter to Elton John, McKay works in relative obscurity.  The 31-year-old songwriter may not sell many albums, but I'll put my money on "Ding Dong" over Folds' "Battle of Who Could Care Less" in a contest of bitter songs about alienation.

Friday's concert opened with a seductive reading of "Sentimental Journey."  During "Crazy Rhythm," McKay verbalized an internal dialogue.  "Only the best for Overland Park!" she squeaked.  A rendition of "A Tisket a Tasket" emphasized the absurdity of the song.  Not every standard was soothing.  "(What Did I Do to Be So) Black and Blue," for instance, is a difficult song for a blonde 31-year-old Manhattanite to cover.  A take on the Beatles' "I'm So Tired" exposed the song's murderous intent.  She dedicated a straightforward version of the Loretta Lynn hit "One's On the Way" to Planned Parenthood.

McKay's interpretive skills and clever songs suggest that just a couple tours opening for the likes of Regina Spektor and Rufus Wainwright might afford her a more commercially substantial career.  Yet Stephen Holden has a different idea.  His examination of the state of cabaret in The New York Times  suggests that McKay is one of a group of under-40 performers who "occupy the middle ground behind cabaret’s haute and demimondes."  (Link via Emily Jones Behrmann.)

---
Wicked Wayz was scheduled to open for horrorcore rapper Brotha Lynch Hung at Aftershock on Friday, September 28.  Instead, a candlelight tribute was held on State Avenue for a member of the rap crew.   Chad Ford, a.k.a. Creepy Face, was killed in what The Kansas City Star characterized as a "rolling gun battle" in Kansas City, Kansas, earlier in the week.  KCTV5's report has the genuinely shocking details.  The context couldn't be more chilling.  (Initial tip via Tony's Kansas City.)

---
Hearing Lupe Fiasco's "B*tch Bad" on KPRS is like being offered a bottle of water in a whiskey bar.  (Yes, I'm a hypocrite.)

(Original image by There Stands the Glass.)
Posted by Happy In Bag at 10:45 AM