Rough Shop- Just Because It Was Christmas 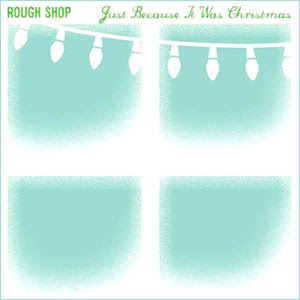 Had the MP3 of "Just Because It Was Christmas" not been emailed to me directly by a member of the band, I would have sworn that the new seasonal song was created by the celebrated likes of Ian McLagan, Amy Rigby, The dB's or The Rumour. It's rooted in precisely the type of British pub rock that hits me like a mug of spiked eggnog.

The instant classic served as my introduction to the Rough Shop collective but the St. Louis band is a known commodity in their hometown. They performed at the Riverfront Times's awards showcase earlier this year. And my friend Steve Pick wrote the liner notes for their new release. Here's an excerpt:

On Just Because It Was Christmas there's no hint of ironic distance from the act of celebrating Christmas. Nor is it a leaden, overly-reverent, uncritical recitation of what everybody has heard before. It is a collection of beautiful, emotionally truthful, sometimes funny, sometimes sad songs, and it deserves to be added to the list of exceptional Christmas albums.

The eleven-song Just Because It Was Christmas album is available here.

---
Kansas City Click: Jimmy Wayne and Chris Young are among the country stars crooning Wednesday at the Midland.

Ampichino appears at America's Pub on Thursday.
Posted by Happy In Bag at 9:51 AM