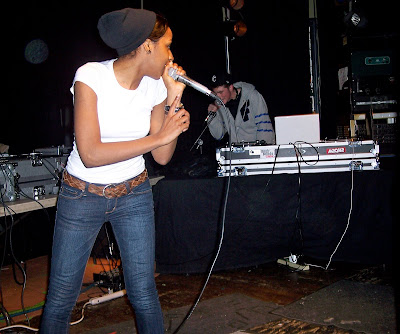 I attended two shows at The Record Bar last week. The first was a Monday jazz matinee. The second was a hip hop blowout on Saturday night.

One of the shows felt stale and was poorly attended. The other crackled with the expectant energy that can only be attained with the presence of an enthusiastic crowd.

And it's not what you might think. The jazz gig crushed the hip hop show in both audience size and artistry.

Diverse may be the darlings of Plastic Sax and other observers of the Kansas City jazz scene, but a Monday show with a ten dollar cover at a rock-oriented club is not exactly a sure-fire recipe for success. A youthful crowd of about 100 showed up for Diverse's dynamic show. Joined by exciting saxophonist Logan Richardson, the band offered a riveting hard bop performance.

The two revelations of the night, at least for me, were the hip hop-informed drumming of Ryan Lee and the clever colorings added by keyboardist John Brewer. The perpetually surprised look Brewer favors reflects his startling improvisational approach. His concepts steer the group safely away from any hint of fogeyism. I had to leave during the second set. I trust the final thirty minutes were even better.

Fans of Soul Providers are also attractive. There just weren't very many of them on hand Saturday. Even though the hip hop collective is firmly established on the scene, only about 60 fans paid five dollars to see them.

Young Storm (pictured above), Reach, Dutch Newman and Hozey-T were among the night's featured entertainers. While none were less than good, only Les Izmore was great. He's not the best MC in the collective, but his artistic vision is more compelling than that of his colleagues. While others fall back on cliches, Izmore embraces his experimental streak.

The Soul Providers would benefit from mixing it up at their next event. May I suggest a collaboration with Diverse? 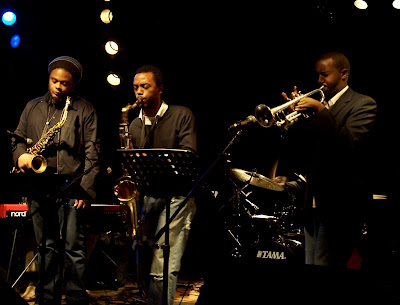 (Original images of Diverse with Logan Richardson and Young Storm of the Soul Providers by Plastic Sax. Cross-posted from Plastic Sax.)
Posted by Happy In Bag at 9:28 AM

"The Soul Providers would benefit from mixing it up at their next event. May I suggest a collaboration with Diverse?"

I need this to happen. Seriously, that would be great.

I realize too late that my post doesn't convey my deep affection for the Soul Providers crew. I love those guys.

That's not to say that an assist from members of Diverse, Mouth, the Good Foot, the Hearts of Darkness, etc. isn't a good idea.