Kevin Mahogany- I Love You More Than You'll Ever Know 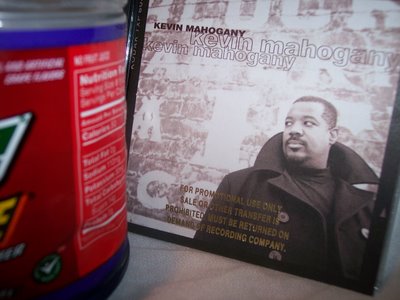 Kevin still loves you, but his song is gone.

I liked to take my date to a bar called Jimmy's Jigger back in the '80s. It was situated on the east side of the state line that divides Missouri and Kansas. And it bordered the south side of a street that at the time separated the gentile part of town with the gritter urban core. The Jigger house band was fronted by Kevin Mahogany, and his music was similarly situated at the crossroads. He wrapped his enormous voice around songs associated with the Temptations, Randy Travis, Luther Vandross, Jon Hendricks and Joe Turner. Blues, jazz, country, funk- it was all the same to Mahogany. This self-titled 1996 major label effort is one of the more mainstream (i.e., least jazz) albums in his large catalog. While Jimmy's Jigger is gone, the now internationally known Mahogany plays a couple dates in the Kansas City area this weekend.
Posted by Happy In Bag at 7:08 AM