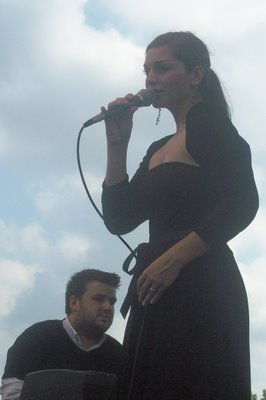 She looks like Claire Danes, possesses Joni Mitchell’s instincts and inhabits a musical landscape dominated by Norah Jones. Pop-jazz performer Erin Bode and her band performed a revelatory hour-long set yesterday at the Jazz In the Woods festival in suburban Kansas City.

Bode isn’t a great vocalist; she sings with a girlish breeziness. She compensates with grace, enthusiasm and an impeccable taste revealed in her choice of covers. Her eleven-song set featured five of them- "Graceland" and "Born At the Right Time" by Paul Simon, U2's "I Still Haven’t Found What I’m Looking For," Bob Dylan’s "Tonight I’ll Be Staying Here With You," and best of all, an inspired cover of "I Can’t Help It" from Michael Jackson’s Off the Wall.

The band’s originals are also interesting, especially keyboardist and songwriter Adam Maness’ catchy set-opener "Holiday." A standup bassist and an aggressive drummer also supported Bode. In their worst moments the quartet meandered into bland but entirely likeable light pop. They’re not producing "serious" art in the vein of Cassandra Wilson. Their sights are definitely aimed at the mainstream. The primarily middle-aged festival audience was charmed.

Bode is a delightful, promising artist. Even so, only time will tell if three years on she’ll be singing duets with James Taylor or if she’ll be crooning in the lounge of the Holiday Inn at the St. Louis airport. There is absolutely no doubt, however, that Bode gave an ideal performance on a steamy Sunday afternoon.

Additional songs from Bode’s two releases on the distinguished Max Jazz label, the new Over and Over and 2004's Don’t Take Your Time, are available at her site. There Stands the Glass' regular format will return tomorrow. Unless, of course, Bode asks me to join her at Graceland.
Posted by Happy In Bag at 7:49 AM