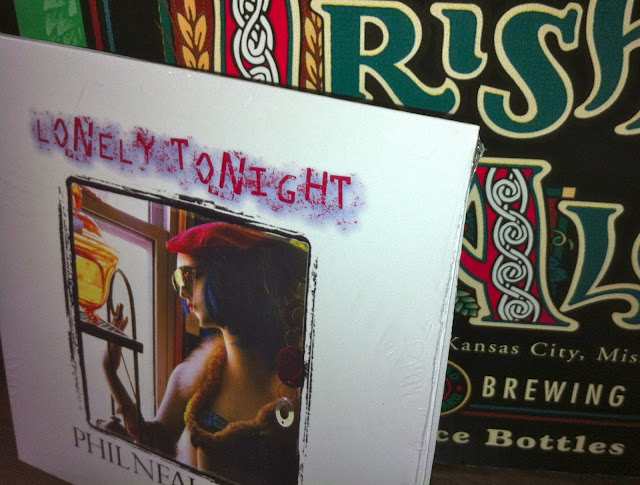 Every eighteen months or so I find myself digging through my music vault in search of albums by the Records, Bram Tchaikovsky and Brinsley Schwartz.  There's a certain nostalgic itch that can only be scratched by the power pop and pub rock of another era.  Given everything that's transpired in the past three decades, it's impossible for today's musicians to match that gloriously naive sound.

Or is it?  Lonely Tonight, the latest release by Kansas City's Phil Neal & the Wornalls, is a pitch-perfect throwback to that era.  Its eight songs are untouched by time.

Neal comes by the sound honestly.  He led the power pop movement in Kansas City thirty years ago.  The videos for his minor hit "Standard Question" and "2 Time Loser" are essential artifacts of Kansas City music history.

While dealing with more mature themes, Neal remains true to those roots.  Sure, Lonely Tonight has a few pitch problems, but that's precisely why it works.   The complete lack of affectation and a steadfast commitment to old-school production values are charming.  Lonely Tonight doesn't contain an ounce of pretension.

The next time I get a hankering to binge on power pop and pub rock I may just reach for the delightfully anachronistic Lonely Tonight.  Better still, I may head to a live performance.  The band plays an unplugged show at Nica's 320 on February 16.


---
My previews for ten of the acts at the Middle of the Map festival are published here.

---
The advance word on Richard Thompson's new album was that he was taking a different musical approach.  Lies!  Electric sounds exactly like at least a half dozen other Thompson albums.  And that's great news for his cult dedicated fans.  I'm not really feeling this sound right now, but "Another Small Thing In Her Favor" hits me where it hurts.

---
Mod revival, anyone?  Check out Paradise's "Humans and Stars".

---
May the jazz gods strike me down- Danilo Perez's contributions are my favorite component of Wayne Shorter's fine new Without a Net album.

---
I'm not feeling the lead electric guitarist on this otherwise exquisite video of Fatoumata Diawara's performance at Globalfest.

---
Cult of Luna's Vertikal is my favorite metal album of 2013 so far.  Here's the representative "Mute Departure".

---
I honestly don't know if I'm man enough to book passage on the Kid Rock Cruise.

---
Prediction #1- The new album The Electric Word will make 2013 a breakout year for the Relatives. RIYL: the Holmes Brothers, Lee Fields, Jesus.

---
Meaningless prediction #2- The dude behind Night Beds is going to be a star.  RIYL: Fleet Foxes, wimp-folk, beauty.

(Original image by There Stands the Glass.)
Posted by Happy In Bag at 12:37 PM

No hating, Bill. It's Nica's not Nico's.

Heaven knows how many times I've made that mistake, Gary. I've called it Nico's all along. Thanks.