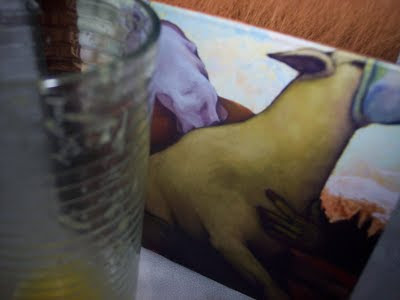 Unflinching and world weary, his Thief and Rescue album is a courageous document about refusing to surrender in the face of seemingly insurmountable adversity.

It's not pretty, but it's real.

Co-produced by Barber and Brian Beattie, Thief and Rescue sounds like a lost Lou Reed album recorded in Austin between Rock and Roll Heart and Street Hassle. Barber's hard-bitten demeanor is worthy of the lofty comparison. Besides, both men understand that the baritone saxophone is the most underutilized instrument in popular music.

A reproduction of an original Barber painting makes for one of 2009's most harrowing album covers. And Barber's acknowledgment about the funding of Thief and Rescue is a poignant statement about the price of art (click the "paintings, etc." tab).

I'm breaking my rule of exclusively listing events in the immediate vicinity of Kansas City to note that John McEuen will perform Saturday at the Farris Theater in Richmond, Missouri.

The Wee Trio play Sunday at Jardine's.
Posted by Happy In Bag at 1:49 PM

Which Lou Reed songs have baritone? I thought Marty Fogel, who played with him during the period you allude to here, played tenor. Street Hassle is my favorite Lou album, so thanks for the tip on Lee Barber.

I defer to your expertise, BSNO, but I hear a deep, rich bari on Rock and Roll Heart. Incidentally, Barber is originally from Louisiana- that's another reason you might dig his album.

Thanks for posting this wonderful track from a guy I'd never heard of. Indirectly, it reminds me of Chris Whitley, though I couldn't say how.

Good call, BD. There's a sense of dignified desperation in the music of both men. Some people, I suppose, call it the blues.