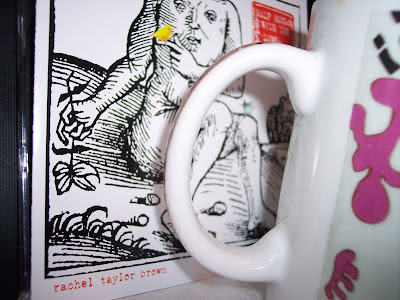 The story has ended.

Half Hours With the Lower Creatures, the new release from Portland's Rachel Taylor Brown, opens with ambient noise that slowly builds into an ominous dreamlike pulse. If Ennio Morricone could be convinced to score a nasty slasher film he would do well to come up with something as eerily evocative. It's an appropriate start to the bleak and often harrowing album. Inevitably, Brown's art-pop will receive comparisons to Tori Amos and Regina Spektor, but it more closely resembles Supper's Ready-era Peter Gabriel. "Abraham and Isaac" is representative of the album's ugly beauty. "You always hurt the one you love," she imagines Abraham sighing as he prepares to sacrifice his son. Half Hours With the Lower Creatures will be released nationally in May. Until then, it's available for purchase at CD Baby.

---
I watched bits of PBS' broadcast of the New York Philharmonic's North Korean concert last night. The program streams here. I have mixed feelings about such "musical diplomacy." And what's up with optical illusion that makes the audience in the front section seem invisible?

The best soul blues lineup possible in 2008 comes to the Hale Center on Saturday. Bobby "Blue" Bland, Latimore, Bobby Rush, Shirley Brown and Marvin Sease are among the attractions.

Dozens of musicians converge on BB's Lawnside BBQ Sunday to raise money for the annual Hope House benefit.
Posted by Happy In Bag at 9:51 AM