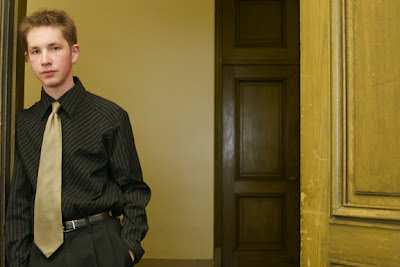 With the recent passing of Oscar Peterson, many jazz fans might feel that the music they love is fading into oblivion. It's just not true. A startlingly young generation of jazz musicians is bringing fresh insights and new energy to the music.

One of the most promising prodigies is Julian Waterfall Pollack. The teenager is already attracting significant attention. While Marian McPartland called Peterson "the finest technician that I have ever seen," she's also a Pollack patron.

Both as a straight-ahead jazz pianist (his MySpace) and in a jazz-informed pop setting as Grace and Julian, Waterfall's accomplished playing and forward-thinking sensibility are already very rewarding.

I'm delighted to present an unedited email interview I recently conducted with Pollack. (I added bold text for emphasis.)

There Stands The Glass: I suspect that you discovered me and my blogs because I occasionally write about Eldar, another remarkably young jazz pianist.  Do you know him?  Do you sense a musical kinship with him?

Julian Waterfall Pollack: I actually have not met Eldar. I admire what he has done, especially with his new record. His technique is scary! I sense a certain musical kinship with him in that we are both young pianists in the jazz scene trying to develop new ideas, but I feel that our approach to music is very different.

TSTG: Have you heard Jaymay, Blue Note Record's latest signing?  She combines pop and jazz in a fashion not unlike Grace and Julian.  It seems like that style might represent what's considered jazz in 2007. Any thoughts on the semantics of jazz?

JWP: It was not until recently that I checked out Jaymay. Her music is very unique and I like it. However, I feel that her music lends itself more to a pop audience. To me, jazz means improvisation, and her music does not contain much improvisation. Jazz does not have to be swing 4/4 time (for all I care it could be a techno beat) but there has to be improvisation; otherwise, it's not "jazz."

TSTG: I'm enthralled with Robert Glasper's new release.  You list him as an influence at your MySpace account. He seems to have discovered the secret to successfully bringing a hip hop sensibility to jazz piano. Glasper doesn't play it- he implies it.   Since I lack your technical expertise, can you explain to me why it's so hard to do what Glasper does without sounding obvious or cheesy?

JWP: Glasper's really doing something new right now. You are totally right, he implies hip-hop in his music. The reason he can do it so organically is because he can play so well in the individual genres. He can play great be-bop as well as playing the most sensual chords you'll ever hear on the Rhodes in a hip-hop group. It doesn't sound cheesy when he does it because it's just natural for him to cross over when playing each style. When other people try to do it, it's just not natural.

TSTG: I have an uninformed bias against formal jazz education.  It seems that jazz education is a bigger and more promising industry than jazz performance.  Do you care to defend it?  Or can it be a disadvantage?

JWP: I completely agree with you. After a certain amount of jazz lessons, there's nothing left to teach. Jazz education at the University level is the biggest part of the jazz industry. It's depressing, but that's just how it is. Jazz has become too sophisticated for the average person to understand and really, I mean REALLY, dig. I just hope that the jazz community and fans stays alive. Honestly, I think it will. There will always be a select group of people who really love substantial art forms.

TSTG: You seem to be developing parallel careers- a straight jazz profile and a pop one.  Or is all just one thing to you?  If they are separate entities, how do they help and/or hinder your development?

JWP: It's hard to juggle the two careers, that I can't deny. I would like to treat them as one thing, but I can't. I think that a lot of musicians are dealing with this issue these days. You can't be just a "jazz" musician and expect to make a living unless you are one of the chosen few, and I really mean it when I say "few." Lots of jazz musicians have to do pop projects--and they don't like it, it just pays well. Fortunately, I really do love pop music and I like writing pop tunes. I bring improvisation to the table with the "Grace and Julian" project and it is extremely satisfying. I think above all, pop music helps the development of my jazz career rather than hinder it.

TSTG: You're still a teenager.  Have you even decided what kind of career do you hope to have?

JWP: Right now I am 19-and-a-half, a sophomore at NYU. I just want to be able to play the most beautiful music in the world for the rest of my life. I want music to be the way I make a living because music is my life. I hope to have great success, and I hope to work in all genres: jazz, pop, hip-hop, and even classical. Right now, I'm studying classical composition at NYU.

TSTG: How did you manage to appear on Marian McPartland's Piano Jazz?

JWP: I was playing at the Monterey Jazz Festival, Last Generation Festival (which is the high school competition) in 2006 and Marian had sent a friend of hers out to the festival to find a young musician to interview. Her friend saw me and asked the judges about me. One thing led to another and I got an e-mail from her asking me to send her my CD, Goin' For It. She said she had a friend who had an international radio show. I had no idea she was talking about Piano Jazz! Anyhow, a few weeks later, she e-mailed me saying she had given the CD to Marian and that Marian wanted me on her show. A few months later, we recorded the show in New York.

TSTG: What's your performance schedule for 2008?  Where can people go see you?

JWP: I'm starting off 2008 playing in my hometown, Berkeley CA, at the Jazzschool with my trio. We play there every six months and it's always really fun. It's a great place to play. Then I head to Miami FL to play with Grace at this Gala for the NFAA (the Clifford Brown/Stan Getz All Stars belong to this organization). January 26th I play with the trio at Smalls in New York City. Not a lot is planned for the winter because of school. A tour is being set up for the summer. I will for sure be making appearances in places such as Northern California, Colorado, Wisconsin, and Louisiana. This will all be updated on the website and MySpace page.

TSTG: At the end of 2008- twelve months from now- what do you hope to have accomplished?

JWP: Well, I have this project that I'm working on right now called "Sea of Stories". I've been writing pieces that are based on great literature. These pieces have titles such as Death of Hamlet, Invisibility, Odyssey, On the Road, and more. I played some of these pieces when I toured over the summer of 2007 and the audiences really loved these pieces. I am planning to record the album in 2008. I feel this is going to be my first real personal statement recording. This is going to be "my" sound.

TSTG: Do you intend to continue self-releasing your music?  Or would signing with a record label be advantageous?

JWP: I will continue self-releasing my music unless I get a deal I like from a good record label. Today it seems like it's almost better to be independent because you have more control.

TSTG: In a blindfold test of Ellington's "Solitude," a listener would never guess that you're just a kid.  You sound like a wizened old pro.   Do you feel experienced, or are you faking it?

JWP: When I play, I try to play tastefully, and that's what the pros do, so I guess I am succeeding if you think I sound like a wizened old pro! Although I am young, I do feel that I have had quite a bit of experience playing the standard repertoire. It's a very important part of improvisation because it is base one. You have to be able to improvise over standards before you can move on to more complex material.

TSTG: My favorite song is "The Golden Key."  Maybe it's your use of pedals; I can't quite pin down what I like about it.  Were you invoking a specific feeling or artist?

JWP: The Golden Key is actually the name of a children's book by George MacDonald. I remember listening to it on Books-On-Tape when I was a kid and it completely mesmerized me. It was so magical. I saw that book on my bookshelf over the Summer and took it out and read it. Then I went the piano and I thought of that magic feeling. Within ten minutes I wrote the tune, "The Golden Key." The Delay Pedal adds to the magical feeling by setting up a whirlwind of repeats and perfect time.

TSTG: "The Death of Hamlet" is resembles an art song.  Do you have words in mind for that piece?  What's the story behind it?

JWP: After seeing Derek Jacobi's performance of Hamlet, I wrote this piece. There are no words. Hamlet is such a powerful play. The language is beautiful and the story is heartbreaking. I tried to write the piece "Death of Hamlet" in the same manner: a beautiful melody and heartbreaking harmony.

TSTG: Grace's voice is so big- almost overwhelmingly big.  (Live performance video.) Do you compose with that in mind?  How does it affect your sound?

JWP: When I write music with Grace, it's fifty-fifty. She writes the lyrics, I write the harmony and structure: we work on the melodies together. She has a huge voice and I try to write music that will support her. I think it has been working out. I really dig our new record.

TSTG: I like your organ work on the pop record.  Do you think you'll ever make an organ jazz album?

JWP: You know, I don't think I'll ever make an organ jazz album for the same reason that most saxophone players wouldn't try to make a trumpet album. The organ is so different from the piano. I have learned how to play a lot of funky stuff on the organ, enough to do it on my pop projects (and occasional overdubs on jazz records), but when it comes to playing "jazz," I have to stick with the piano. I'd have to go back to school if I want to learn how to play jazz organ! 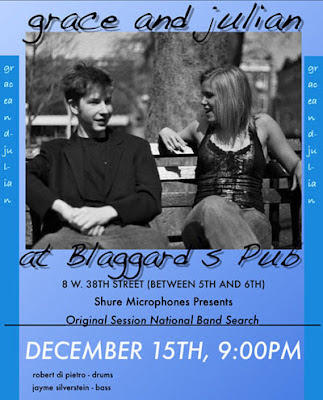