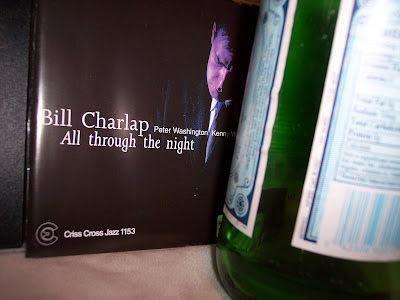 I tuned into the fuzzy signal of Lawrence's KANU-FM as I stepped into my car a few nights ago. I was awestruck by a brilliant pianist's lyrical reading of "Autumn In New York." It didn't quite sound like Bill Evans, but it was clearly a jazz giant at work. Was it Kenny Barron? Ahmad Jamal? Thankfully, the DJ back-announced it. I suppose I shouldn't have been surprised to learn that it was Bill Charlap's new Live At the Village Vanguard. He's been touted to the heavens for years, but the evidence is now incontrovertible that Charlap has a permanent place in the jazz pantheon. This solo piece from the Willie Wonka songbook is from All Through the Night, which features his long-time collaborators, Peter and Kenny Washington. While I prefer his ballad work, here's a recent video showing that Charlap's playing is pretty even on livelier material.

----
My latest musical obsession is banda star Graciela Beltran. She's pretty, sure, but it's her voice and unique charisma that have me hooked. This video is typical.

---
I have to admit that the new Spoon is really good.

---
Kansas City Click: Cry in your beer at the Grand Emporium tonight with the The New Tragedies, Richard Gintowt of OK Jones, and Grant Richard.
Posted by Happy In Bag at 8:03 AM