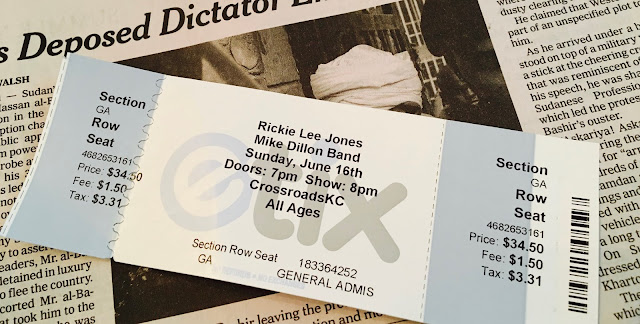 Seeing Rickie Lee Jones for the first time is akin to discovering that Santa Claus is real.  It turns out that Jones really is an old-school beatnik who has no choice but to inhabit a rarefied realm in which ‘50s-era West Coast jazz and Dylanesque folk intersect.

I paid $40 for a magical 95-minute trip to Coolsville, a place where Jones raps several lines of Cypress Hill’s “(Rock) Superstar” one moment and casually mentions that she recorded her 1991 album Pop Pop with jazz luminaries including saxophonist Joe Henderson and bassist Charlie Haden in the next without seeming the least bit incongruous.

Most members of the absurdly small audience of about 300 at Crossroads KC on Sunday were Jones’ generational peers, a circumstance that allowed me to ride the rail to get an intimate view of her interactions with percussionist Mike Dillon and two crackerjack multi-instrumentalists.  I didn’t dare snap a photo.  A testy performer, Jones directed her ire at a smoker, an annoying blurter and even a passing motorcyclist in the first few minutes of the show.  I didn’t want to be her next target.

Jones went full torch singer on “Company”, delivered a bebop interpretation of “Bye Bye Blackbird” and oversaw a hot jazz reading of “Nagasaki” that she admitted was based on the 1937 arrangement by the Mills Brothers.  Without the studio polish that ruined the original recording, a version of the devastating junkie blues “Living It Up” tore me to pieces.

(Original image by There Stands the Glass.)
Posted by Happy In Bag at 6:59 AM