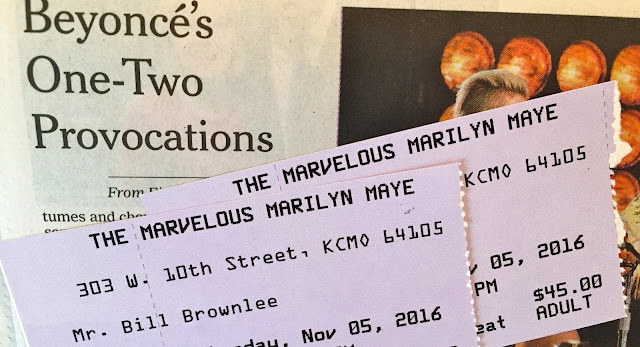 If the going rate for a psychologist is $100 an hour, the seemingly exorbitant price of admission to see Marilyn Maye at Quality Hill Playhouse last weekend was a relative bargain.

I spent $90 on two tickets to hear a 75-minute show by the dynamic 88-year-old cabaret star partly to demonstrate to my life partner that I intended to grow old with her.  Maye complied with my agenda with a set that emphasized putting a brave face on our imminent mortality.

Rather than emphasizing the line “you better chase all your cares away,” Maye’s doleful rendition of “Get Happy,” warned that the members of the near-capacity audience of about 125 should “get ready for the judgement day.”  Tears streamed down my face during Maye’s interpretation of "If He Walked Into My Life," a heartbreaking song of regret that I’d never heard from a musical I’ve never seen (“Mame”).


---
I reviewed Lil Uzi Vert’s concert at the Uptown Theater.

---
I reviewed a concert by Aida Cuevas and Mariachi Reyna de Los Angeles at Yardley Hall.

---
I wrote an extended preview of a Car Seat Headrest show for The Kansas City Star and Ink magazine.

---
I’ve worked my way through the first three-and-a-half hours of the six-hour Otis Redding document Live At The Whisky A Go Go: The Complete Recordings.  Otis and the band are (obviously) great, but the brutally repetitive sets, Otis’ awkward stage patter and the Whiskey’s atrocious emcee make it a slog.

(Original images by There Stands the Glass.)
Posted by Happy In Bag at 2:20 PM