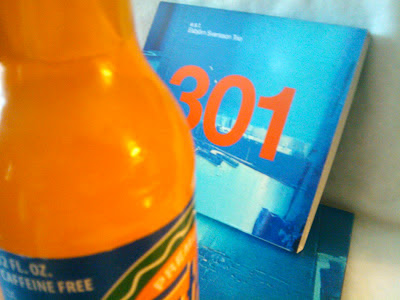 I freely admit that I occasionally participate in the "whither jazz" discussions that careen around the internet like shots fired in an empty bank vault. The "absurd lack of an audience" is a frequently-employed tag at my jazz blog Plastic Sax. Instead of weighing in at this heated thread at NPR's A Blog Supreme, I'll use this album review as a meditation on jazz's declining popularity.

I reviewed a concert headlined by the Dirty Dozen Brass Band last week. While poorly attended by the venue's standards, it was still thrilling to witness over 200 people dancing to a raucous jazz act. I fully endorse the #BAM model displayed by acts including the Dirty Dozen, Nicholas Payton, Esperanza "The Future" Spalding, A Tribe Called Quest and Robert Glasper. The other end of the progressive jazz spectrum is no less viable. Witnessing concerts by Enrico Rava and Tord Gustovsen in recent months has only deepened by enthusiasm for the potential of refined European jazz.

The Esbjorn Svensson Trio was perhaps the most popular act of its type to emerge in the past decade. It was poised to single-handedly popularize jazz among a new generation of listeners when tragedy struck.

It's impossible for me to listen to 301 without asking "what if?". What if Svensson hadn't died in 2008? Would E.S.T.'s career momentum have continued? Could E.S.T. have been the act to successfully connect to the indie rock set in America? I think so. The 301 recordings are from a 2007 session reportedly planned for release prior to Svensson's death. Pamela Espeland of Bebopified puts it well: "301" is not a collection of scraps or outtakes. This is the e.s.t. we know and love, the trio that makes us think and feel, groove and raise our fists in the air."

Each of the seven tracks on 301 is excellent. The brilliant "Inner City, City Lights" is a post-Keith Jarrett, post-Pat Metheny mood piece. Is it "jazz"? Who cares? "The Left Lane" is a 13-minute jam that actually goes places. "Houston, The 5th" is an experiment in feedback. "Three Falling Free, Part I" includes a drum feature for Magnus Öström. The raw "Three Falling Free, Part II" is more Mars Volta than Bill Evans. "The Childhood Dream," the soulful blues that closes 301, belies the commonly held assertion that European jazz is bloodless.

Then again, I could be delirious. As of this writing, 301- easily one of the most exciting and artistically important albums regardless of genre to be released in 2012- is ranked as the #20,869 best-selling music title at Amazon. "What if?,"  indeed.


---
The members of Saint Etienne apparently uncovered the teenage diary of one of my former girlfriends. I'm smitten by "Over the Border.

---
I refuse to upgrade my Sugar collection.

---
Kansas City Click: You'll find me at the Celebration at the Station on Sunday.

The Louis Neal Big Band returns to the Blue Room on Monday.

Class Actress is at the Riot Room on Tuesday.

(Original image by There Stands the Glass.)
Posted by Happy In Bag at 1:34 PM

Based on this post, I sampled a couple of songs, and I preferred Class Actress to Esbjorn Svensson. Thanks!

Way to test our friendship, Rick!