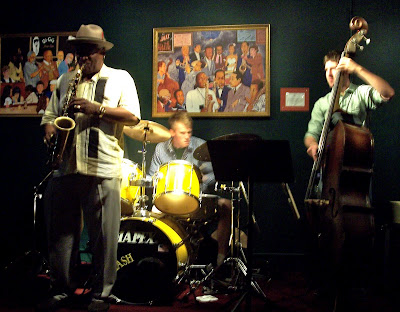 I learned a long time ago that I should make myself comfortable when I spot Bobby Watson entering a jazz venue.

I was headed for the door of GiGi's Jazz Inn last night when Watson walked in. I'd spent the previous 45 minutes hearing six of his UMKC students conduct a loose jam session. I was feeling guilty about my plan to abandon GiGi's for Louis Hayes' gig at The Blue Room. Outside of GiGi's remarkably enthusiastic staff, I was the sole member of the audience. I loved what I'd heard.

A couple of the kids are already great. All are promising. Their rough patches were actually ingratiating. When someone called out "Moanin'", for instance, a student confessed that he didn't know the tune. Another kid kept insisting on structured arrangements. "I don't like jam sessions," he muttered.

Watson's presence put an immediate end to these shenanigans. Additional musicians and a handful of patrons of Watson's jazz program at UMKC had followed the saxophonist to the club at 3226 Troost.

Boys became men as they soloed. Playing spot-the-influence became easier. Hey- that guy listens to Robert Glasper! That kid's quoting Wayne Shorter! Watching Watson interact with his students was also fascinating. He listens intently and regularly pulls kids aside to offer animated counsel. And thankfully, Watson isn't shy about stepping onto the stage to show his apprentices how it's done.

It was a great night. I don't even regret missing Hayes.

Want to know when this event happens again? Me too. Aside from a Facebook account where someone usually posts the day's events, Gigi's doesn't have any web presence. It drives me nuts. Last night I implored club owner Gene Garland to create a calendar. After he suggested that he doesn't have a budget for such indulgences, I encouraged him to look into Google's free calendar template. It's so easy that any idiot can do it.

---
Darkness On the Edge of Town remains a big deal for me, so yes, I'm geeking out over The Promise.

---
Sit Down, Man, the latest free mixtape from Das Racist, is hellaciously good.

The Rhythm & Ribs Jazz and Blues Festival runs from eleven to eleven on Saturday. 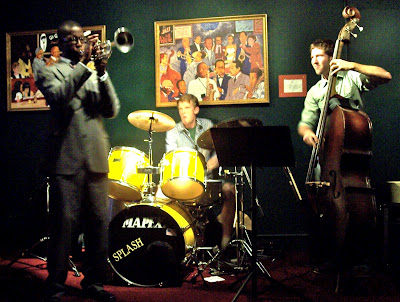 That Brian "Spider" Steevers is my favorite drummer in Kansas City these days.