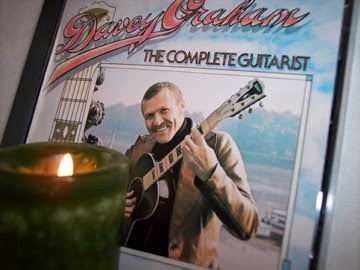 His innovations influenced folk artists John Renbourn, Bert Jansch and Martin Carthy. Jimmy Page probably learned a thing or two from Graham. And whether they know it or not, today's freak-folk crowd is also in Graham's debt. His '60s recordings fused jazz, folk, blues and rock in entirely new ways.

Presumably, 1977's The Complete Guitarist is so named because Graham offers sixteen vastly differing solo works. Celtic, classical, jazz, folk and blues are represented in a solo format. I selected "Hardiman the Fiddler" for its brevity; I highly recommend all of it.

---
Before heaping praise on the Rum Drum Ramblers, one of the two co-owners of St. Louis' Vintage Vinyl- I assume it's Tom, but it could be Lou- articulates my sentiment about today's blues scene:

"There's a whole lot of what is called blues but really isn't... Do we ever need to hear anyone record that BB King or Elmore James song every lazy bar band can knock out in a slow walk? Yes, we have had so much heaped on our heads, in the name of blues, but so damn little that's original and shows players using the form to drive nails in the head and heart."

---
Kansas City Click: KoolAide and the Exact Change Band appear at the Kansas City Blues & Jazz Juke House tonight.
Posted by Happy In Bag at 8:34 AM