Although I’ve seen him perform five times in the last eight years, I don’t track Joshua Redman’s every move.  So I was stunned by what I heard when I cued up Still Dreaming, the saxophonist’s new album with trumpeter Ron Miles, bassist Scott Colley and drummer Brian Blade.

The abrasive barrage of Ornette Coleman harmolodics was a wholly unexpected but entirely welcome surprise.  Only after my initial 40-minute listening session concluded did I investigate the impetus for the album.  It’s inspired by Old and New Dreams, the estimable project that included Redman’s father Dewey.

The interplay on Still Dreaming is slightly more reserved than the wild-eyed attack of Old and New Dreams.  Even so, it’s remarkably prickly.  Hearing Redman play this bracing material in his appearance in the 2018-19 season of the Folly Jazz Series promises to be thrilling.


----
I reviewed a concert by the Charles Williams Trio at Plastic Sax.

---
Roger Clark, the drummer on classic Muscle Shoals tracks by the likes of Clarence Carter and Bocephus, has died.  (Tip via BGO.)

---
The best thing that can be said of Stone Temple Pilots’ new self-titled album is that it doesn’t desecrate the memory of the late Scott Weiland.  Sterile production limits the possibilities of the solid songs.

---
I’m all about the liberation theology espoused by Ry Cooder on The Prodigal Son.  The many people who rail against Christianity on my social media feeds would be surprised to learn that the anti-capitalist, pro-reconciliation messages embedded in The Prodigal Son reflect the preaching I hear at my mainstream Protestant church on Sundays.  RIYL: Warren Zevon, Jesus, Woody Guthrie.

(Original image by There Stands the Glass.)
Posted by Happy In Bag at 1:04 PM 1 comment: 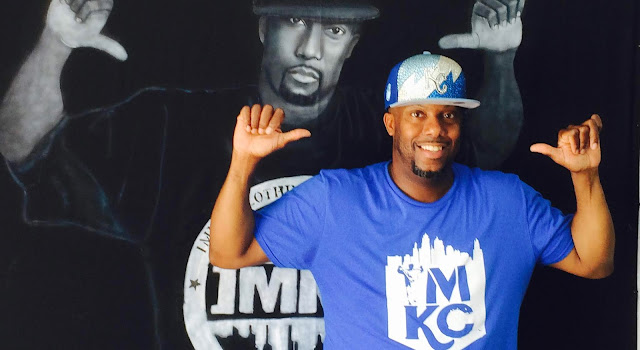 My latest audio feature for KCUR aired this morning.  I enjoyed my hangs with Walter Edwin, aka The Popper.  The segment lives online here.


---
I reviewed James Taylor’s concert at the Sprint Center for The Kansas City Star.

---
I also reviewed Jimmy Buffett’s concert at the Sprint Center for The Kansas City Star.  Opening act Caroline Jones was a revelation.  Her overproduced new album is almost unlistenable, but her solo renditions of songs like “Old Blue” charmed me on Saturday.

---
I previewed Greta Van Fleet’s appearance at the Middle of the Map festival.

---
I woke up three hours earlier than usual today because I was so eager to hear Pusha T’s Daytona.  Kanye West’s production is stupendous.

---
Old-boy networks can be good things.  Don Was, the current top dog at Blue Note Records, signed his old Was (Not Was) bandmate Dave McMurray.  Music Is Life is an old-school instrumental party album.  RIYL: Maceo Parker, Detroit, Lou Donaldson.

---
The Brad Mehldau Trio is a victim of its own success.  If Seymour Reads the Constitution doesn’t sound revolutionary, it’s only because so many imitators have made the trio’s attack seem commonplace.  It’s not.

---
What sorcery is this? Elina Duni’s magical Partir is unlike anything I’ve encountered.  RIYL: June Tabor, Albania, Márta Sebestyén.

---
I don't hear what everyone else claims to hear in Kacey Musgraves’ Golden Hour.  Post-Christine McVie pop doesn’t appeal to me.  Musgraves’ new songs remind me of the formulaic music I hear during my periodic digs through the closeout racks at Macy’s.

---
I hadn’t encountered the striking music video for “Ndogal,” a track from Cheikh Lô’s 1995 album Ne La Thiass, until World Circuit uploaded it this week.

---
Iceage’s Beyondless is a mess- and I like it.  Strings, horns and other unlikely embellishments complement the slurred vocals of Elias Bender Rønnenfelt on the Danish band’s strung-out fourth album.  RIYL: The Saints, hitting rock bottom, Nick Cave.

(Original image of The Popper by There Stands the Glass.)
Posted by Happy In Bag at 12:18 PM No comments:

I usually recoil when I encounter strings in country music.  Orchestral flourishes have spoiled otherwise perfect songs by the likes of George Jones.  Yet I thrill each time strings are introduced on Sparrow, the outstanding new album by Ashley Monroe.  Her songs about sex (“Hands on You”), death (“Sparrow”), heartache (“Paying Attention”) and family ties (“Mother’s Daughter”) lend themselves to the lush backdrops.

---
The initial concept for this fine KCUR profile of Fatih Seferagic originated with me.

---
I was floored when I first heard Arctic Monkeys’ Tranquility Base Hotel & Casino.  I fully embraced the unexpectedly mature sound.  Focusing on the often hilarious lyrics my second time through deepened my admiration of the album.  Yet the melodramatically woebegone vocals of Alex Turner irritated me on the third listen.  My fourth run-through with the windows rolled down in rush hour traffic soured me on Tranquility Base Hotel & Casino.  The album wilts in my whip.  I’ll reserve future spins of tracks including “Four Out of Five” for my next late-night pity party.

---
My lizard brain appreciates Five Finger Death Punch’s And Justice For None.  Wanna make something of it?  Here’s “Sham Pain”.

---
While I’m indifferent to the headliner, I’m awestruck by the lineup of the 2018 edition of the Soundset festival.

---
The strength of Cruzando Borders validates my enthusiasm for Los Texmaniacs’ performance at the Kansas City Folk Festival in February.

---
I repeatedly make the mistake of underestimating Terence Blanchard.  I almost didn’t bother listening to the ferocious Live, a protest album with a funk-oriented electric band.

(Original image by There Stands the Glass.)
Posted by Happy In Bag at 6:36 PM 2 comments:

Dave Holland has ruined everything.  Again.  Uncharted Territories, the 69-year-old British bassist’s monumental new collaboration with saxophonist Evan Parker, keyboardist and electronic manipulator Craig Taborn and drummer Ches Smith, makes all other improvised music seem woefully inferior.  (I could hardly be bothered to write a review of a mainstream album by a highly respected musician for the Kansas City jazz blog Plastic Sax yesterday.)  Uncharted Territories is a searing modern masterpiece of room-clearing skronk and heartbreakingly subtle beauty.  The musicians extemporaneously play as a quartet and in “every possible subset of duo and trio configurations.”  Each of the 131 minutes is stunning.  Holland’s 1973 album Conference of the Birds is revered by free jazz enthusiasts.  Uncharted Territories is no less magnificent.

(Original image by There Stands the Glass.)
Posted by Happy In Bag at 8:36 AM 5 comments:

Concert Review: The Breeders at the Rave 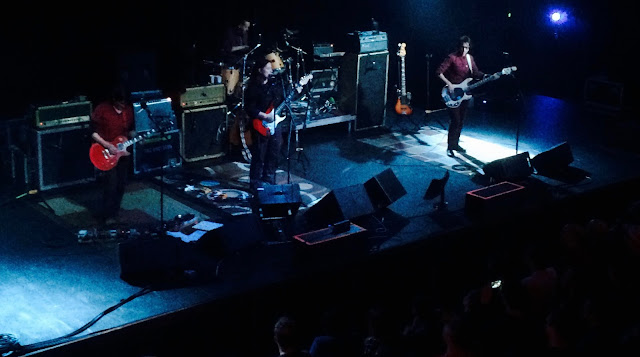 My mother asked if I was having an affair after I told her I was in Milwaukee when she called me on Wednesday.  C’mon mom!  Infidelity hadn’t crossed my mind, although I’ll confess that I swooned over Kim and Kelley Deal at a concert by The Breeders a few hours later.

I hadn’t seen the accomplished indie-rockers in so long that I’d forgotten how effortlessly the sisters’ radiant smiles and warm voices can beguile large audiences.  About 1,000 people purchased $30 and $40 tickets to grin and sing along with the reunited classic lineup of the band at The Rave.

The Breeders’ 95-minute outing resembled the feel-good resolution of a reality television program.  Two of rock’s most agreeable eccentrics, the Deal sisters engaged in testy repartee that seemed like good-natured familial banter rather than the symptom of a more serious conflict.

I’m still not sold on the quartet’s new album All Nerve, but renditions of fresh selections including “Walking with a Killer,” “Get in the Car” and “MetaGoth” were every bit as powerful as versions of older tracks like “Cannonball” and the Pixies jam “Gigantic.”  Even so, I couldn’t shake the sense that even first-rate rock in 2018 is akin to Dixieland in 1958- it can still be vibrant and meaningful, but it’s a marginal form on the wane.

Irresistibly cheap airfare rather than the concert or a tryst (really, Ma?) lured me to Wisconsin, but the Breeders provided a nostalgic highlight of my chaste getaway.

(Original image by There Stands the Glass.)
Posted by Happy In Bag at 1:28 PM 1 comment: Does my ability to withstand all 55 minutes of the recent reissue of Iannis Xenakis’ hellish cacophony Persepolis make me some kind of superhero?  Nah.  I just dig noise.

A varied set of additional new releases of difficult music have helped me maintain equilibrium during choppy times.  While it’s not particularly loud or even conventionally disagreeable, Matthew Shipp’s solo piano release Zero is capable of unnerving fans of the thrash band Slayer.  Neither a free jazz freakout nor an avant-garde classical recital, Zero is a confrontational display of next-level genius.

On the prog-rock end of the spectrum, Vortex documents a collaboration between the Swiss band Sonar and the experimental American guitarist David Torn.  Vortex is tailor-made for listeners who appreciate the discordant aspects of King Crimson and Weather Report.

I’m unable to determine if Anteloper’s Kudu is the best or worst album in this survey.  The accomplished jazz-oriented trumpeter Jaimie Branch teams up with percussionist Jason Nazary on the abrasive effort.  The addition of synthesizers and sound manipulation makes Kudo occasionally sound as if art school punks are paying homage to Miles Davis’ Bitches Brew.


---
I reviewed the Flyover festival for The Kansas City Star.  My three favorite performances were by the Flatbush Zombies, Snow Tha Product and Post Malone.

---
I examine the Uriel Herman Quartet’s appearance at Black Dolphin for Plastic Sax.

(Original image by There Stands the Glass.)
Posted by Happy In Bag at 5:07 PM No comments:

Album Review: Rich the Factor- CEO of the Blacktop 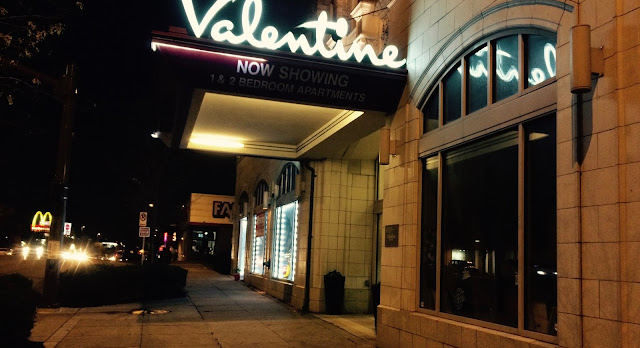 Rich the Factor, the most respected rapper on the east side of Kansas City, continues his career renaissance with CEO of the Blacktop.  Since the termination of his incarceration in 2016, the man born Richard Johnson has issued a steady stream of bold albums.

More in keeping with the immaculate sound of a Maybach Music release than the swampy sonics that usually accompany Rich the Factor’s menacing raps, CEO of the Blacktop is loaded with essential bangers.  “Diamond N the Ruff” sounds like a secret meeting between Sly Stone and Rick Ross in Swope Park.  “Move Up” is one of the silkiest songs in Rich’s vast catalog.

He threatens adversaries in “Flashy” by reminding them that “we from the middle/we can touch you in 24 hours/hit you with a box of shells/they two or three dollars.”  Rich could hit me in less than 24 minutes, but in doing so he’d eliminate one of his most conspicuous advocates.

---
I reviewed a concert by the SFJazz Collective at Plastic Sax.

---
“Take a Byte,” the third song on Janelle Monáe’s Dirty Computer, exemplifies my objection to her sensual android aesthetic.  The sterile sound just doesn’t appeal to me.  I’ll stick with Zapp’s “Computer Love” to get my digital kicks.

---
I feel as if I should check myself into rehab after listening to Post Malone’s Beerbongs and Bentleys.  RIYL: alcohol, Lil Peep, drugs.  Here’s “Psycho”.

(Original image by There Stands the Glass.)
Posted by Happy In Bag at 10:26 AM No comments: