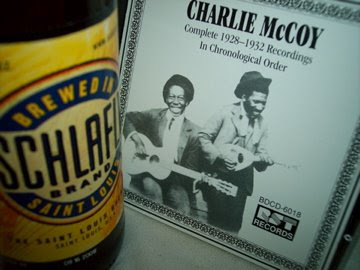 I'm a devotee of acoustic blues. I rarely feature the style at There Stands the Glass only because a handful of specialty sites already do an outstanding job of presenting the form. But I'm in the mood today.

The 24 tracks on Complete 1928-1932 Recordings reveal the remarkably prescient voice of Charlie McCoy. Working under his own name or in groups including the Mississippi Mud Steppers and the Jackson Blue Boys, McCoy's creative arrangements presage the music of today. The vocal interjections of Rosie Mae Moore on "Staggering Blues" could have been made by Lady Sovereign or Missy Elliott.

According to the invaluable liner notes, McCoy died in 1950 at "a Psychopathic Hospital in Chicago." I featured Charlie's brother "Kansas" Joe 13 months ago. Need more? Try "Last Time Blues".

---
Kansas City Click: Gerald Spaits and Charles Perkins collaborate tonight at the Blue Room.
Posted by Happy In Bag at 9:03 AM