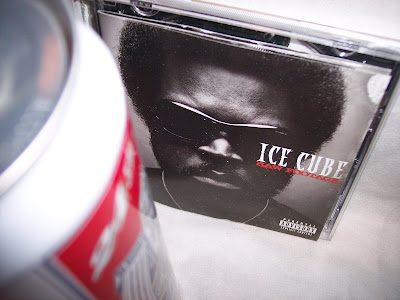 In short, he sounds like a cranky, short-tempered reactionary. Raw Footage is the gangsta rap equivalent of "Get off my lawn, you damn kids!" And I respect Ice Cube all the more for it.

The focus is squarely on the veteran's booming delivery; Ice Cube's authoritative flow is second only to Chuck D's. Raw Footage may not be Straight Outta Compton, but my generational affinity with Ice Cube contributes to my deep affection for the release.

(Don't let the video mislead you; "Do Ya Thang" is perhaps Raw Footage's weakest track.)

---
Similarly, Tim Finn composed a remarkable essay about the relationship between aging and rock'n'roll.

---
Kansas City Click: The North Vs. South Music Festival begins tonight.
Posted by Happy In Bag at 9:06 AM

Tim's article was stunning in its accuracy. I'll give the Glimmer Twins some slack, but Tyler just creeps me out.

Sunday's show is going to be memorable and I WILL NOT be there.

I wonder what covers he will play that night? Some version of "Kansas City"?

He's dropped most of the songs from Magic and seems to just want to go out and wing it for 3 hours and bring the house down. Which he will.