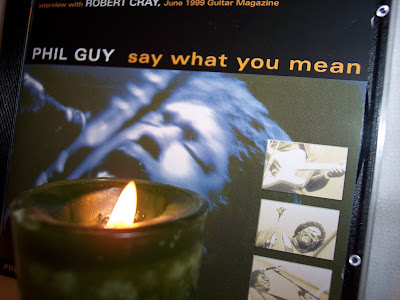 On 1999's Say What You Mean, Phil Guy laments that "I'm the last of the blues singers- everyone else is gone." If the situation was bleak then, it just got worse. Guy died August 20. Comparisons to his brother Buddy are inevitable. On this fine disc, Phil sounds rawer and more down to earth than Buddy. I'm not a fan of counterproductive slaps at other forms of music ("This here rap music, Lord it ain't no song"), but Guy's uncompromising attitude is representative of his tough, burly music. This vital footage from Theresa's Lounge is essential viewing for blues fans.

---
Hard core rhythm and blues fans in Kansas City will face a dilemma on October 8. Tina Turner is at the Sprint Center and Nikka Costa is at The Record Bar. I'm one of the guys who loses sleep wondering why Costa isn't already today's Tina Turner, or at least a Lenny Kravitz or a Joan Osborne. Maybe part of the problem is that the best Costa video on YouTube is a thirty-second commercial for the Gap.

I've been listening to Nikka Costa again lately, and I wonder the same thing too. Looks like she'll have a new album out in October.