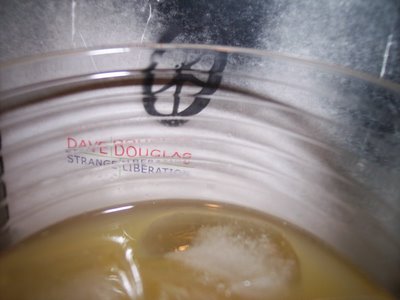 I'm not convinced that Dave Douglas is the most interesting performer in progressive jazz. The trumpeter is widely hailed as a brilliant emancipator of new music. I won't go that far, but it's obvious that he has the good sense- and the resources- to surround himself with incredible talent. On "Catalyst," the last number on 2003's Strange Liberation, Douglas quickly gets out of the way and lets Bill Frisell make some wicked guitar noise. He allows Chris Potter to skronk through his sax solo. Bassist James Genus asserts himself as if he's the date's leader four seconds in, and drummer Clarence Penn is relentless. Uri Caine's throwback keyboards fill out the racket.
Posted by Happy In Bag at 6:20 AM

Nice selection. Reminded me of being young with open ears and hearing Miles shift gears with the release of "Bitches Brew". You're listening regime is much stronger than mine and your collection vastly superior to mine, since I gave up collecting years ago. But, we share in common that bond of "open ears" and being able to distinquish what is worthy of hearing. Keep on with this blog, you here?

Thanks, M&S. Speaking of Bitches Brew, did you see that Bennie Maupin is playing in KC on Sunday afternoon? He's slotted between Ida McBeth and Keb Mo at the 18th and Vine festival. Something tells me that his sounds won't be appreciated. At all.

Update- I just read that Maupin cancelled. Maybe my initial comment scared him off...