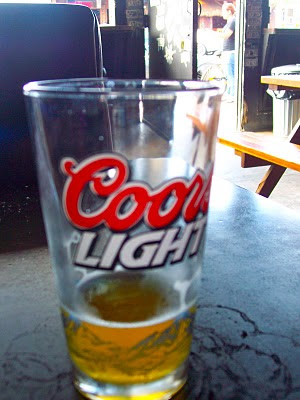 I watched a woman's head bounce off the floor of the Riot Room last Friday night. A minute or two after her hard fall, she was aggressively making out with the guy who had propped her up against a wall. I wondered about the different ways the two of us were experiencing Mac Lethal's performance.

Maybe I'm reading her all wrong, but I suspect the woman is the type of Mac fan who shouts along with his atrociously juvenile mashup of "Party In the USA" and ICP's "Miracles." While I love "Pound That Beer" as much as the next red-blooded Midwesterner, I'm just not amused by gratuitous disses of Fergie and Soulja Boy.

Geeks like me would much rather hear the detailed grammar lesson offered Saturday. Mac also did extended off-mic verses that wouldn't have been out of place at a highbrow poetry reading. He's definitely reached an artistic crossroads.


---
BGO informed me that Bobby Rush, Denise LaSalle and Theotis Ealy performed at a Thanksgiving blues dance in Kansas City. I'm deeply distressed that I didn't hear about it until after the fact.

---
I like the low-key trailer for Reach's forthcoming mixtape.

---
The drama inflicted on Deerhunter's Bradford Cox reminds me why I no longer even consider sharing approved music at this site.

Angela Hagenbach is featured at the Spirituality and All That Jazz concert Wednesday at Unity on the Plaza.

(Original image by There Stands the Glass. I didn't bother taking a photo Friday because so many fans were filming the show. Yet not a single video has been uploaded to YouTube.)
Posted by Happy In Bag at 7:16 AM

The B-side of What Am I Living For? was I Don't Want to Hang Up my Rock&Roll Shoes. How's that for value?

The Band sang the latter as the finale on the live Rock of Ages album, and looking around my files I found that there's an outtake of the former, a weird acoustic version, on the reissue of their oldies collection Moondog Matinee.

And check out this rare Everly Bros. recording where they make What Am I Living For? sound like a suicide note:

Incidentally, other obligations have kept me from Monday trivia. I hope to return soon.

The last (Thanksgiving) breakfast dance I heard about (and went to) was in 2007 at the adandoned Montgomery Wards building at Bannister Mall. Bobby Rush and Denise LaSalle then, too and it was FANTASTIC, but not as good as the small hall I saw him in a couple years before that in KCK. I just don't have the right connections to know about these shows and would love it if somehow next year somebody was able to get the word to me. Bobby is really old and who knows how many more T-day's he's got left? Let me know next year if you hear anything!

Bobby Rush is a wild man! He served as one of Bobby "Blue" Bland's opening acts at the Midland Theater earlier this year and stole the show. I'll let you know if I hear of any upcoming shows of that ilk. (Shirley Caesar, for example, is in town Saturday.)