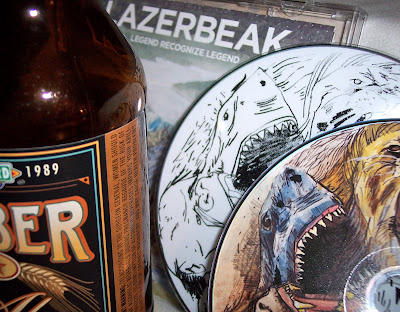 One of the two albums I played last night stirred my soul. The other one was a bitter disappointment.

The pointillistic pop of Legend Recognize Legend, the new album by Lazerbeak, came as a shock. The member of Doomtree is best known as one of the elite producers of the hip hop underground. Forget all that. Legend Recognize Legend is more akin to the epic psychedelia of Super Furry Animals. Fans of popular indie rock acts ranging from Arcade Fire to Phoenix will find a lot to like in Lazerbeak's latest.

Kanye West's My Beautiful Dark Twisted Fantasy isn't out yet, but it's not difficult to find. (Don't worry- I'll buy a physical copy when it's officially released on November 22.) West is, of course, brilliant. No popular artist of the past decade made more interesting or enjoyable music. I named Graduation my top album of 2007. And MBDTF's "Power" is one of the best songs of 2010. Taken as a whole, however, it seems as if West has finally succumbed to his own hubris.

The stark sonic contrast between the two projects is striking. West has access to the world's best talent and the resources to clear any sample. Yet MBDTF sounds inferior to Legend Recognize Legend. Hey, Mr. West- you should reach out to this guy.

It's no surprise that the lyrical content of the two projects is also dramatically different. I experience Lazerbeak's album as a rumination on God. (But that's just me.) Kanye's album is about- what else?- himself. (But that's just him.) Both albums are packaged with a DVD. Lazerbeak offers a low-budget but (mostly) creative video for every track. West, God bless him, directed a portentous 34-minute film. Compare and contrast above.

It's possible that I'll tire of Legend Recognize Legend and warm up to MBDTF with additional listening. I hope so. The world would be a lesser place with a watered-down West. Even Lazerbeak, I suspect, would agree.

---
A few of my peers are less than pleased that U2 is skipping over Kansas City on its stadium tour next summer. I'm far more upset that The Fleshtones' current tour doesn't stop in KC.

I'm not ashamed to admit that I love Colt Ford. He does his thing Friday at the Beaumont Club.

Apocalypse Meow-related events are taking place all weekend but Saturday's multi-artist bill at the Riot Room looks the most appealing to music lovers like me. Tim Finn explains.

The Record Bar hosts the CD release party for The People's Liberation Big Band on Sunday.

(Original image by There Stands the Glass.)
Posted by Happy In Bag at 11:46 AM

the Kanye "leaked" album that is out there floating around the interwebs isn't a real copy of his new album. It's just copies of singles that have already been released mixed with the Good Friday stuff.

It's definitely not the real album

Crap, I thought I was logged in when I posted that last comment. If we both have the same leaked copy, here are a few things I noticed:

Thanks, Matt. I'll buy a physical copy of the deluxe version album the day it's released. My fingers are crossed.

By the way, please don't mention "rhymes with brake" again. Google has deleted most TSTG posts in which he was referenced.

Gotcha on the ixnaying the rakedray talk.

I remember reading a year or so ago that google had randomly shut down a bunch of music blogs that were providing free & legal mp3's from artists that directly provided the links to the bloggers with the intent of having them posted. That's really too bad that it continues to happen....almost makes me want to switch mine to wordpress.

I gave up on posting MP3s of any stripe several months ago. Even so, mentions of certain things, including "rakedray," prompt takedowns. I intend to switch hosts, but man, I'm just in it for fun. And that's not fun.

I'm far more upset that the Batusis made a Midwest swing right past us!

I wasn't even aware of the pairing of Sylvain Sylvain and Cheetah Chrome, Rick. We are missing out.