A True Word: The Flatlanders at Knuckleheads 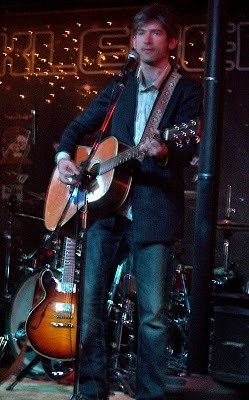 While I'd seen Joe Ely, Jimmie Dale Gilmore and Butch Hancock perform separately on several occasions, I'd never seen the three on stage together. Along with about 250 other geezers, I paid over thirty dollars to see The Flatlanders on Wednesday. Since both The Pitch and The Star reviewed the show, I'll just add a few personal notes.

*"He looks old," I gasped when I first spotted Gilmore. "He is," a friend replied. Gilmore is 65. I had no idea...
*If Johnny Cash possessed, as has been suggested, the voice of God, Jimmy Dale Gilmore has the voice of an angel.
*I don't know what Paul Cebar was doing there, but it was a treat seeing the one-time regional draw again.
*I'd forgotten that Butch Hancock's "If You Were a Bluebird" is one of the greatest love songs ever written.
*The opening set by Colin Gilmore, pictured here, failed to win me over. He's more James Taylor than Townes Van Zandt. There's no shame in that, of course, but it didn't work for me.
*I'll accept that no one played the saw, but leaving "Tonight I Think I'm Gonna Go Downtown" off the setlist was blasphemous. Just for that egregious omission, I'll link to Mudhoney's version.

---
True Womanhood posted a new song at SoundCloud. "The song is almost entirely made up of samples we made by clanging pieces of metal around in a mile-long sewer tunnel + bass guitar, 808 drumz, and vocals- all run through a severely malfunctioning tape delay," writes the band's Noam Elsner. The band's forthcoming album was reviewed at There Stand the Glass last month.

---
Jazz musician and composer Harry Whitaker has died. Roy Ayers' "We Live In Brooklyn, Baby" is one of his best-known works. Smalls Records offers a detailed biography.

Alaturka returns to Jardine's on Sunday.

Crosscurrent pays tribute to Lennie Tristano at Jarndine's on Monday.

(Original image of Colin Gilmore by There Stands the Glass.)
Posted by Happy In Bag at 10:17 AM