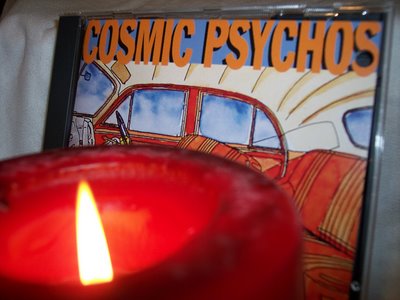 The champagne is flat.

Robbie "Rocket" Watts, guitarist for the Cosmic Psychos, died July 1 at the age of 47. The Australian band had played a gig in support of their new release the previous night. This 1993 Amphetamine Reptile label release is a good example of the vital sludge Watts produced with the band.
Posted by Happy In Bag at 8:38 AM

I have to check this out. I love the photos on here.

Well, this another in a long list of bands that have escaped my ken, and while I wasn't exactly blown away by this boisterous bit of whatever you call it, I am always saddened to see someone die so young when things perhaps are beginning to look up the guy.