Grace Potter and the Nocturnals- 2:22 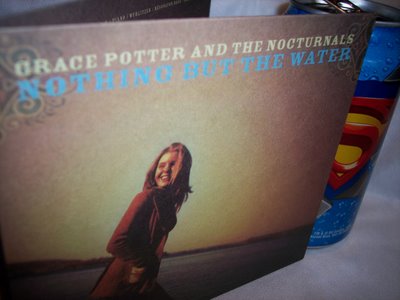 It’s the most ingenious marketing plan of 2006.

While attempting to locate an elusive Tim Buckley and Judy Collins duet among dusty Elektra label master tapes, an archivist uncovered a staggeringly brilliant unreleased recording. After a chemically-inspired jolt of inspiration during Phil Lesh's set at Bonnaroo, the label's marketing deparment decided to release the 35-year-old album as a new independent effort by a fictional act out of Vermont named Grace Potter and the Nocturnals. Even with the obviously fake name- I would have gone with “Hermione Hogsmeade and the Hippogriffs”- people actually believe the ruse. To further convince skeptics, the label even produced images of the “band"'s live performances.

Anyone who listens to Nothing But the Water will recognize that not a note on it could have been recorded any later than 1976. Surely it’s an old Rory Block or Bonnie Bramlett session. It’s no secret that authentic folk-blues records with memorable songs like this just aren’t made any more. This so-called “Grace Potter”even name-checks J.J. Cale in the first song. C’mon! The album bears no resemblance to tedious contemporary “blooze,” nor does it have anything in common with the safe sounds of Norah Jones’ hits.

The rest of the world may be fooled, but not me. You’ll find Nothing But the Water on my year-end top ten list- that'd be my top ten reissue and archival recording list, of course.
Posted by Happy In Bag at 12:22 PM