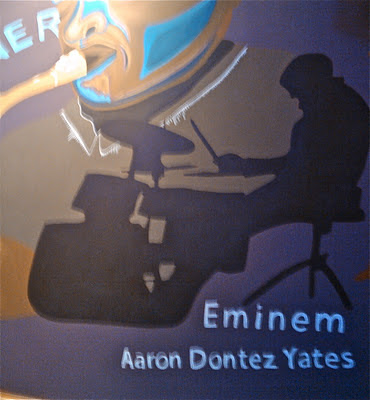 Two of the finest musicians in the Kansas City area endured a tough gig Monday. The duo's discrete music was repeatedly drowned out by indifferent patrons at an establishment in Johnson County.

One of the band's members attempted to address the worst offenders by politely engaging them at their table as his partner vamped. The group of twenty-somethings didn't take the hint.

"We do weddings- anyone out there getting married?" the musician later asked with a murderous glare. "No? Well, we also do funerals. We play exactly the same repertoire."

A handful of attentive listeners laughed, but it really wasn't funny. More often than not, people unable to S.T.F.U. impede upon my enjoyment of live music.

---
Jim "Motorhead" Sherwood , a native of Arkansas City, Kansas, died on Christmas Day. (Tip via a source who prefers to remain anonymous.)

(Original image by There Stands the Glass.)
Posted by Happy In Bag at 7:03 AM

You could check out Mouth and 3 Son Green at the Riot Room tomorrow.

Herman Mehari sitting in with Mouth.