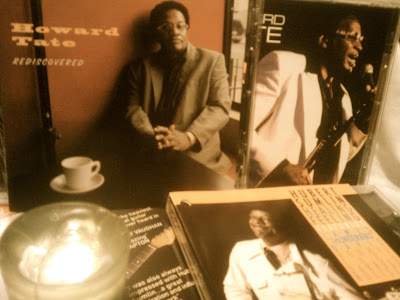 Life can be painful for inveterate music nerds. The spiritual and earthly highs music affords are often matched by extended periods of despair and sorrow. The last few days have been particularly difficult.

My music-related day job has been an emotional roller coaster. And a friend who owns a troubled nightclub has been vilified by many otherwise decent people. Meanwhile, many of the musicians I admire are scrambling to find alternative venues. Last night I was horrified as dozens of oblivious people spoiled otherwise exquisite acoustic performances by Brandi Carlile and the Secret Sisters. (Here's my review.)

And then there's the upsetting news of the deaths of Hubert Sumlin and Howard Tate.

I've been on Sumlin since I first heard Lindsay Shannon play Howlin' Wolf back when KCUR hosted the blues hound's weekly radio show. Exposure to Sumlin didn't make me throw away my Elton John and Aerosmith albums, but I was electrified by the ferocity of tracks like "Evil". You can imagine how magical my charmed life seemed when I soon discovered that I could sneak into the Grand Emporium to see the man who transformed American music. I never missed a chance to see Sumlin. Here are my notes and a photo documenting his final appearance in Kansas City last February.

While I probably saw Sumlin a dozen times, I don't believe I ever heard Tate sing. The great soul singer's life was complicated. I heard about Tate's initial sides from mentors like There Stands the Glass reader BGO. When he was "rediscovered" a few years ago, I snatched up Tate's recordings along with all the other hopeless crate diggers.

We're all gonna die, and expressing shock upon the deaths of old men is silly. Even so, each inevitable loss chips away at the very foundation of music nerds like me.


---
Nerds compile year-end lists, and my first published entry of 2011 is up at Plastic Sax.

The Knux appear at the Riot Room on Wednesday. The nudity in the linked video is shocking!

(Original image by There Stands the Glass.)
Posted by Happy In Bag at 4:42 PM

nice post on hubert and howard (and hrandi carlile). - mike t. (aka fiddler)