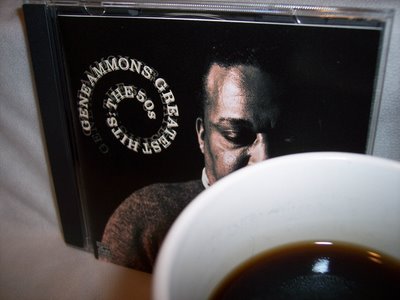 The music walked into the sunset.

Jazz pianist Duke Jordan died August 8. He was 84. While the Steeplechase label tirelessly recorded Jordan as a leader, he's most often associated with his work as a sideman for Roy Eldridge, Charlie Parker, Gene Ammons and Stan Getz. Jordan's rollicking piano kicks off this 1950 battle between Ammons and Sonny Stitt. Originally called "Gravy," when Miles Davis covered this piece four years later it was retitled "Walkin'."
Posted by Happy In Bag at 7:18 AM

What can I say? Jug is among my top ten of favorite sax blowers.

And what a nice way to pay tribute to the late Duke Jordan.

Miles either knowingly or stupidly got credit for compositions he did not write, Four and Tune Up by Eddie Vinson two fine examples.

Not that I have anything in for Miles--heh--he ain't here to slap my ass silly.