Anthony Crawford- The Noise Around Us 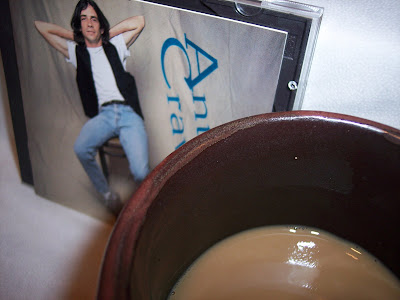 Anthony Crawford has the saddest MySpace page I've ever encountered. It's not like it's been abandoned; someone logged in yesterday. It wouldn't be a big deal if his web site wasn't blank.

Why should you care about Crawford's internet woes? The guitarist is in Neil Young's current touring band. They're playing 24 dates between between tomorrow and December 15, including an election night concert in my town.

By definition- at least in my world- that makes Crawford important. The first few seconds of "The Noise Around Us" could easily be mistaken for a track from Young's Harvest Moon. Crawford's sadly overlooked 1993 album was co-produced by Pete Anderson and Dusty Wakeman.

Visit Crawford's MySpace page if you like what you hear; he could use some friends.

---
I've been inside a few Hard Rock locations, but I've never quite grasped the mania so many people have for the establishments. Officials in Kansas City, Kansas, announced today that a combination Hard Rock casino, hotel and nightclub will be built adjacent to the city's racetrack. A quick glance at Hard Rock's music site indicates that their locations present live music only sporadically.

I listened to Rapture for the first time in years last night. It still sounds great. Anita Baker will undoubtedly reprise much of that album Saturday night at the Midland by AMC.

The Gem Theater hosts Rich the Factor Sunday. The Kansas City rapper's Bucks Over Fame was supposed to have been released this week, although I'm told that 7th Heaven and Streetside have yet to receive it.
Posted by Happy In Bag at 12:51 PM

Rich doesn't need me, Jason, but I still hope he takes heed of the following:

Rich the Factor has been hyping his (excellent sounding) new release for months. His MySpace promised a 9/19 street date. That was a Friday, but whatever.

So I went to 7th Heaven that day to buy it, even though I knew it'll be pretty easy to download for free. I want to support the scene and all that.

The knowledgeable clerk just laughed at me.

"Those Major Factor guys have never made a street date," she said. "They get everyone hyped up and then... nothing."

I drove directly from 76th and Troost to 18th and Highland to catch the Mutual Musicians Foundation Friday Rush Hour jam only to discover that it's "temporarily suspended." (See www.plasticsax.com.)

So after all that, I decided not to set myself up for a third disappointment on Sunday.

Check out Anthony Crawford's songs on the Savana Lee cd........great music and sound

Thanks for the lead, Anon.

savana Redbird is the cd produced by Anthony Crawford and co-produced by savana.

hey Bill,
i just wanted to tell you that i am back up and getting on with life. sometimes it take a fall to go higher and now that time has passed there is much to say. i am back on the road with Neil Young and have been for the past 3 or so years and have just finished a new music project with a band named Everest ( they open for Neil on this tour) and Bo Koster from My MOrning Jacket. its called FIVE IS RED and i did a new and updated version of Noise around me and you can hear this track on my MYSPACE. please go to anthonycrawford.com to see the rest of the story. Most of all i have wanted to tell you that your kindness is uplifting and the fact that you cared enough to say a word about me is big.
take care and i hope to talk to you someday.
anthony crawford
by the way...the Savana RED BIRD project was and still is one of my favorite musical moments and thanks for noticing.

Thanks for checking in, Anthony. Your handsome new site was worth the wait. Let me know if you're up for a pre-show dinner when you're in Kansas City later this month. My email is happyinbag(at)gmail.com.

Just wanted to mention that Anthony Crawford and his wife Savana Lee are part of the new supergroup Willie Sugarcapps. Hope you get to check them out, they are phenomenal live.

Thanks for the tip.