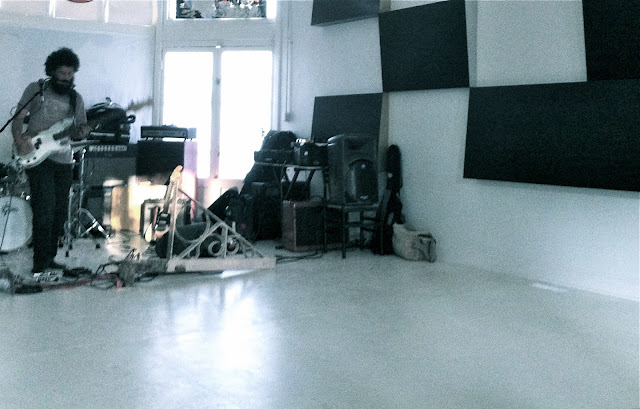 I was the first paying customer through the door at the 2013 edition of KC Psychfest.  I was excited to see the kickoff set by C.J. Boyd.  I was also eager to soak up the same sort of positive vibes emitted at last year's inaugural event.  The energy was so welcoming that I wasn't the least bit perturbed that Boyd's performance was delayed.  (I got the impression that he and the organizers were waiting for the blinding sun streaming through the west windows of the event's "HQ" to go down.)  Boyd played loop-based drones that sounded like Mike Watt on a Charles Mingus bender.  And yeah, he was as good as that combination of references implies.


---
I'd like to think that I immediately began goofing on Jim Morrison's vocals and lyrics the first time I heard "Light My Fire."  Yet Morrison's effort is kept credible by those astonishing keyboards.  When I went through my obligatory Doors phase as a teen, I was more attracted to the sonic feel of "Touch Me," "Peace Frog" and "Soul Kitchen" than the vocalist's bellowing.  I never bought into the mystique of the Lizard King, but I really dug the feel of the band.  Ray Manzarek's subsequent production work with bands like X indicated that he truly "got it."   (He's captured here performing with X last year.)  Manzarek died yesterday.

---
I harp on the "where's-the-audience" theme for the umpteenth time in my review of one of last weekend's performances by the Matt Otto/Alan Ferber Quartet.

---
Why, yes, I am tantalized by the prospect of another groundbreaking Kanye West album.  Thanks for asking.

Greg Enemy is part of Wednesday's bill at the RecordBar.

(Original image by There Stands the Glass.)
Posted by Happy In Bag at 11:38 AM