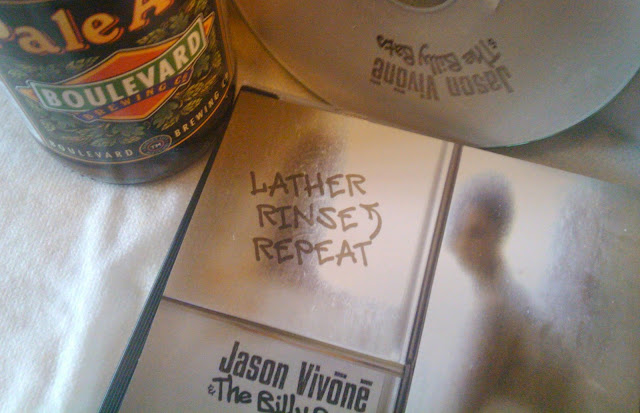 Jason Vivone is one of the most respected blues musicians in Kansas City.  He and his band recently won the Missouri Lottery King of the Roots competition.  The ensemble will also represent the Kansas City Blues Society at the International Blues Challenge in Memphis next month.

Vivone knows his way around a guitar.  He has a terrific voice.  His songwriting is clever.  His respectful admiration of women is commendable.  Vivone clearly knows what's good.  I just wish his new album Lather. Rinse. Repeat was better.  Sure, it's superior to the majority of the standard-issue boogie that passes for blues these days.  But I want more.  Vivone has the potential, I think, to achieve the artistic heights of Jack White, Robert Cray and Gary Clark, Jr.  I won't be satisfied until Vivone makes that climb.

Here's solid footage of Vivone and the Billy Bats performing Lather. Rinse. Repeat's "The Nina, The Pinta, The Santa Maria".


---
Lamb of God, In Flames, Hellyeah and Sylosis were excellent at the Uptown Theater on Saturday.  Here's my review.

---
The last Streetside Records outlet is closing.  The story makes no mention of the legendary Kevin Walsh.

---
I gave Cat Power's Sun one last shot to sink in.  It didn't work.  I respect the effort but the album's just not for me.

---
Tracey Thorn gets it.  "Joy" is a track from her somber new Christmas album.

---
I finally got around to watching a recording of last month's Latin Grammys.  Three observations- Joan Sebastian gave the best performance.  Caetano Veloso is a genius.  And thousands of potential sales were lost because of Univision's ongoing failure to use captions to identify artists.

---
Kansas City Click: High On Fire is Monday's headliner at the Riot Room.

If it's still standing, the Riot Room hosts West End Motel on Tuesday.

Brian Setzer does whatever it is he does these days Wednesday at the Uptown.

Nikki Hill tears it up at Knuckleheads on Thursday.

(Original image by There Stands the Glass.)
Posted by Happy In Bag at 3:46 PM

I had no idea Ed Cassidy had a connection to Kansas City. Stormin' Norman had a great interview with Spirit bassist Mark Andes Monday morning (hat tip again to BGO)

Confession: I know nothing about Spirit aside from two or three radio songs.

Caetano Veloso is a genius.

Btw you might want to check Spirit out. You might appreciate their electric piano jazz side. There's a nice 2-CD overview on called Time Circle. Their best album is Twelve Dreams of Dr. Sardonicus, but for you I'd recommend the one called Clear, which has a nice chill vibe. In general the radio songs are fine but not representative.

Thanks for the guidance.