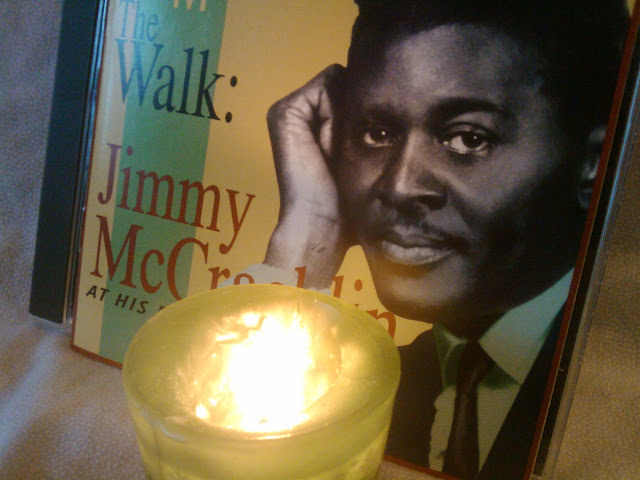 At the advent of the CD era I decided to build a comprehensive collection of classic soul and R&B.   I began the process by acquiring material by giants like James Brown, Ray Charles, Solomon Burke and Aretha Franklin.  I was amazed to discover that the rewards didn't diminish as I worked my way down to the less heralded artists.  Bobby Byrd's funk, for instance, continues to enrich my life.  The quality of Don Covay's music is similarly astounding.

I bought the pictured Jimmy McCracklin compilation for $8.99 at a CD Warehouse on September 18, 1997.  (The receipt is tucked into the booklet.)  Its contents blew my mind.  McCracklin could be as raw as Bobby Bland, as raunchy as Joe Turner and as soulful as Otis Redding.  The revelations didn't end there.

I discovered that the Beatles' "Get Back" is an, ahem, "tribute" to a McCracklin song of the same name.  "The Walk," recorded in 1957, obviously inspired countless songs.  And perhaps most notably, McCracklin wasn't really a bluesman.  McCracklin was a rock artist in the tradition of Ike Turner and Chuck Berry.  That McCracklin's music languishes in relative obscurity is a "Shame, Shame, Shame."  (A YouTube or Spotify upload of the classic song doesn't even exist!)

---
I bet you didn't know that one of the best-selling classical albums of 2012 is by an ensemble based in rural Missouri.  Here's the EPK for Advent at Ephesus by the Benedictines of Mary, Queen of Apostles.

---
Year-end listening: I finally listened to Scott Walker's Bish Bosch.  In a parallel universe- perhaps one in which I'm a disgraced Hungarian prince- it's my favorite album of 2012…  I don't know how I overlooked Anaal Nathrakh's Vanitas while I compiled my year-end album list.  Songs like "Of Fire, and F***ing Pigs" are really working for me right now.  I'm not kidding…  And how in the world did I miss out on the Menzingers' "Good Things"?  It's even better than the Japandroids.

---
Why haven't any of you jerks told me about nouveau honky tonker Jason Eady?  RIYL: The Hag.

---
I'm not surprised that Rhymes-with-snake is threatening to sue retailers for their use of a certain motto.  This blog receives cease-and-desist notifications for merely mentioning him by name.

---
My discovery of the week: Oklahoma's Parker Millsap.  Kid has a voice.  RIYL: the otherwise annoying foot-stomping folk fad.

---
A lot of my pals are excited about forthcoming shows by Bloc Pary and Jeff Mangum,  I'm most looking forward to catching Danielle de Niese at the Folly Theater on February 1.

Feel free to join me Saturday at the RecordBar for Bill Goffrier's show.  Alas, it probably won't sound anything like this.

(Original image by There Stands the Glass.)
Posted by Happy In Bag at 10:51 AM