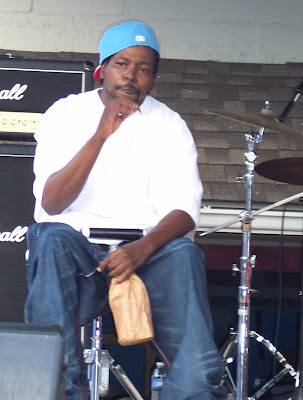 Do you recognize the man pictured above? Until Saturday, I only knew his face from the covers of DVDs and albums.

The self-proclaimed "Ghetto Russell Simmons," Rich the Factor is the biggest Kansas City hip hop artist not named Tech N9ne, Mac Lethal or Fat Tone. And yet I'd never seen him. The details of his relatively rare performances are often, well, a little sketchy.

That's one reason I spent about four hours at Saturday's wonderful Taste of Troost festival. It was the first time I'd seen live performances by Rich the Factor and other artists including Skiem, Rappin' Twan, Miss G and Hustle.

They were all good, but I most appreciated the appearances by D-Locc Da Chop, Cash Image, Sliccs Gotcha (pictured below), rock band Making Movies and underground Oakland legend Killa Tay.

Much of the day's music may have been gangster-oriented, but for vast majority of the thousand people who took it in, it was a convivial street party. 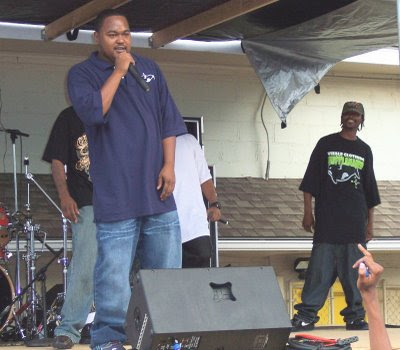 (Original images by There Stands the Glass.)
Posted by Happy In Bag at 6:16 AM

More detailed, mainly, but I totally buried the lede. And that lede: RICH THE FACTOR.