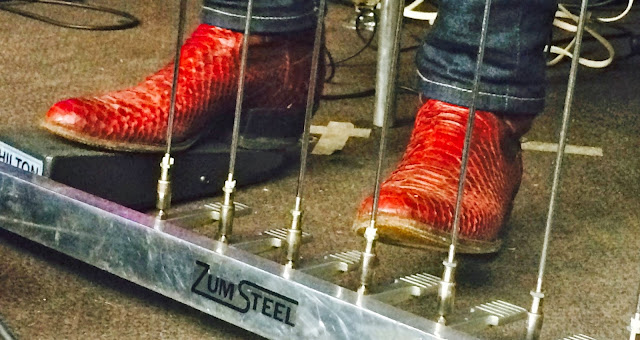 (Original image of pedal steel guitarist Nate Hofer’s boots by There Stands the Glass.)
Posted by Happy In Bag at 11:33 AM

Thanks for the Shamir review. I'll give it a go, but the consequences of me having too much fun will be on your head.

In return I'll recommend the recent Prefuse 73 releases-- the LP Rivington Não Rio and especially the EP Forsyth Gardens. I totally loved One Word Extinguisher way back in 2003, but nothing else he did since got to me like these new releases.

Thanks for the tips.

I disagree with you about the new GP & The Rumour album. From top to bottom I find it a very strong effort. The Rumour is seamless and Graham's aging voice still has the snarl tempered by the wisdom of experience.

And thanks for the tip about Luke Bell. I've decided to convert some You Tube videos to mp3 and then to wav and burn a mix cd of his stuff.

Btw I really liked the Shamir album. I just like the sound of it. The campy androgyny I'd gotten from the videos I saw wasn't really that much in evidence in the listening experience. I'm a cultural elitist, but 'it's got a good beat and you can dance to it' is still a very positive review.

Oh, you're funny. By the way, a paying gig will prevent me from seeing Martha Wash, Linda Clifford and Evelyn Champagne King at the Pride festival on Saturday.