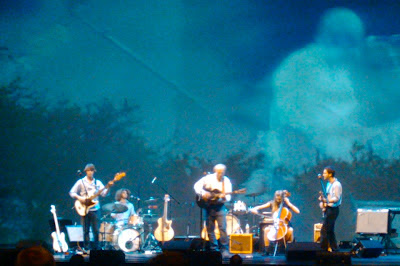 The processed air inside Yardley Hall was deliciously chilly on Friday.  As I spend a lot of time exposed to this summer's extreme heat, the promise of air-conditioning lured me to the free She's a Keeper concert at Johnson County Community College.

I hadn't seen the teen-dominated band since April and the chance to hear it in an acoustically pristine environment intrigued me.  Along with approximately 250 people, I learned that it's progressing nicely.  While the 45-minute set indicated that She's a Keeper hasn't grown out of its adorably awkward stage presence, the band has three strong vocalists and a terrific sense of melody.  Uninitiated readers are encouraged to watch the excellent video for "Stupid Heart" to experience the band's tremendous promise.

If the musicians asked me for advice, I'd tell them to quit listening to anything made in the new millennium.  It's obvious that the members of She's a Keeper take inspiration from Mumford & Sons and the Lumineers.  That's fine, but the band would do well to study American Beauty, Pink Moon, Astral Weeks and a stack of albums by John Hurt, Sonny Terry, the Hot Club of France and Lonnie Johnson.  An injection of blues and swing would help further distinguish She's a Keeper from the thousands of new acts plying a similar terrain.

Then again, She's a Keeper doesn't need my guidance.  Even after being told that the recording was available as a free download, members of the audience purchased 30 CD versions of a live EP after Friday's show.  The band's rabid fan base ranges in age from 5 to 65.  I can't think of another locally-based act with such broad appeal.


---
My five favorite performances at the Mayhem Festival on Tuesday were by Motorhead, Slipknot, Conflicts, Dirtfedd and Betraying the Martyrs. Here's my review.

---
I'm looking forward to seeing if my gigantic melon appears in the background of the new PBS special featuring Joyce DiDonato's with the Kansas City Symphony.  The soundtrack is available at iTunes.

---
Paper Tiger's "Gold Pass" has served as my theme song for the past week.

---
Kyle James is featured on thePhantom*'s "Sotally Tober".  The track is obviously inspired by Tech N9ne's "Everybody Move".  (Via Tony's Kansas City.)

(Original image of She's a Keeper by There Stands the Glass.)
Posted by Happy In Bag at 7:56 AM