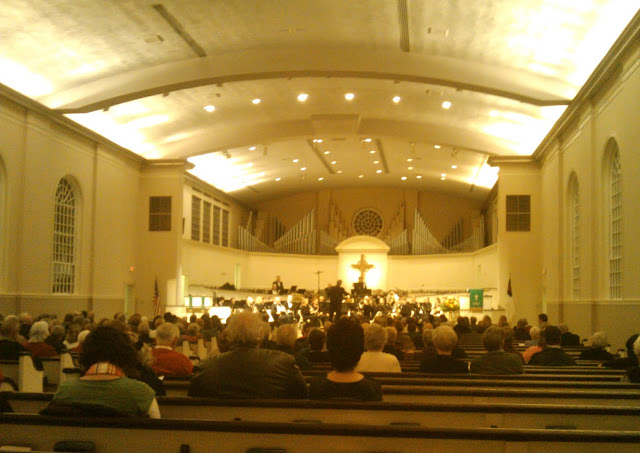 Cut it out! During each of the last three concerts I've attended at Village Presbyterian Church, the bandleader apologized for his ensemble's progressive leanings. The most recent culprit was Dr. Phillip C. Posey, conductor of the Kansas City Wind Symphony.

His attempt to sell the ensemble's forthcoming "Music for the 21st Century" program featuring selections by Vaclav Nelhybel, Ron Nelson and Charles Ives sounded like a pitiful disclaimer at Sunday's jazz-themed concert.

The contrite commentary by Matthew Christopher Shepard of Te Deum (my review) and the church's own Mark Bell of the Village Presbyterian Choir (my review) was similarly disappointing and entirely unnecessary.

Posey, Shepard and Bell should be proud of their bold choices. Gentlemen- you have a strong vision. Own it. I understand that some people don't want to be exposed to unfamiliar music. And sure, the way the audience of about 350 enthusiastically clapped along to J.F. Wagner's Under the Double Eagle March at Sunday's concert was unsettling on more than one level.

Don't become discouraged by the naysayers. Your desire to present interesting music is precisely why I'll continue to patronize your programs. For what it's worth, I've got your back.

I'd hoped to offer a detailed analysis of the concert, particularly pianist James Cockman's work on Rhapsody in Blue, but I was seated near an unruly toddler. The child's incessant yammering, coughing, sneezing and hiccuping didn't allow me to listen attentively.

---
The trailer for The Other F Word elicited a knowing smile out of me.

---
I listened to the new Bjork album on repeat yesterday. It finally took.

---
Here's the trailer for a documentary about Split Lip Rayfield. (Via Back to Rockville.)

---
As the video for "The Game" by J-Young indicates, Kansas City can be a hard town. (Via Credentials Hip Hop.)

I once worked in a warehouse with a member of Foxy Foxy/Sacrifice Isaac. I guess the band(s) has reformed, because an act by that name(s) is performing at The Riot Room on Wednesday.

(Original image by There Stands the Glass.)
Posted by Happy In Bag at 8:44 PM

Loved reading and agree with your insight re: Tech N9ne rivaling Count Basie as rep for KC.