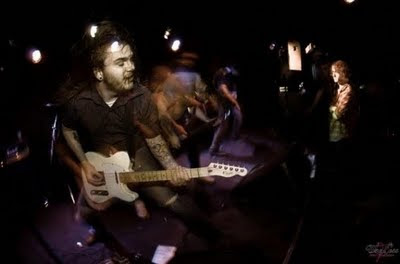 It can be the most liberating and cathartic of musical forms. It's also inherently ludicrous. The head-banging? Hysterical! The guitar solos? Absurd! The song titles? Laughable! The band logos? Preposterous!

Thunder Eagle understands this. Their implicit acknowledgment of metal's contextual silliness allows them to rock even more convincingly. Songs like "Classical Decomposer" and "Alcoholocaust" (grab the MP3 at PureVolume) demonstrate that humor and head-banging go together like vodka and tonic.

As displayed in this year-old video, Thunder Eagle masterfully fuse post-AC/DC blues with Southern rock and contemporary thrash. They've since released the five-song Ride The Timberwolf (another local gag) and are working on their first full-length album.

They hit the Riot Room on Monday.

---
I happily downloaded two free mixtapes by regional artists this week. There Stands the Glass-favorite Stik Figa has a new project with D/Will. It's here. And the download from Mouth, a jazz-funk-reggae-hip hop jam band, is a shockingly diverse project.

---
Kansas City Click: Spoon, The Bravery, Metric and Hockey play for fans of a radio station Thursday at the Midland Theater.

Megadeth touches down at the Beaumont Club on Saturday.

(Image of Thunder Eagle pilfered from Pure Volume.)
Posted by Happy In Bag at 7:39 AM

I didn't find the humor in Thunder Eagle's Classical Decomposer. Instead I found a band seriously hell bent on forcing an average southern hard rock hook and over used heavy metal vocals on the way too open ears. I love heavy metal with the best of us but this just fell a little flat for me.

I appreciate the feedback, CD.