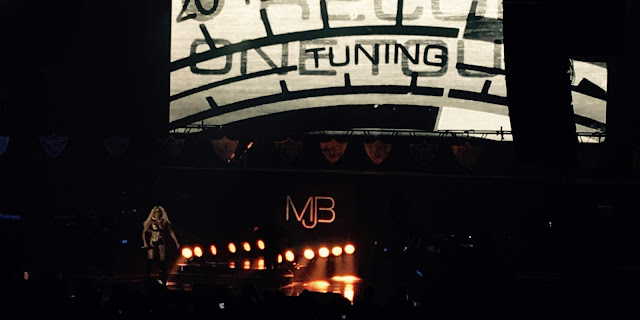 An acquaintance made a distressing confession on Thursday morning.  Citing gun violence and festering social divisions, she told me she was dumbfounded by her daughter’s decision to become pregnant.  Had my friend joined me at the Mary J. Blige and Nas concert at Starlight Theatre that evening, her heartache might have been mended.  Blige offered a generous form of spiritual healing to members of the audience 6,000.

At the risk of committing blasphemy, I’ll suggest that Blige suffers for our sins.  Her unfiltered exploration of pain makes Blige one of the best performers of the new millennium.  She collapsed during a cathartic rendition of “No More Drama” and conducted her signature inelegant dance moves to chants of “go Mary” as if violent physical exertion might expel emotional trauma.

Blige exudes a sense of selflessness, but Nas is in it for himself.  Even though he and a backing band ran through many of his essential hits, his set was wack.  Nas said he didn’t recall the last time he performed in the area- this disappointed fan knows that his previous Kansas City appearance was with Damien Marley at the Beaumont Club in 2009- and repeatedly made the common faux pas of insisting he was in Kansas.  He doubled down on his geographical ignorance by asking “is this where Dorothy got lost?”

Nas’ indifference caused him to slip a few notches on my rap G.O.A.T. list.  My estimation of Blige, however, continues to grow.  If the $45.50 I paid at the gate doubled as a faith-based offering, Blige’s testimony represents one of the most rousing sermons I’ve heard.

(Original image by There Stands the Glass.)
Posted by Happy In Bag at 4:56 PM