You Run Your Mouth, I'll Run My Business 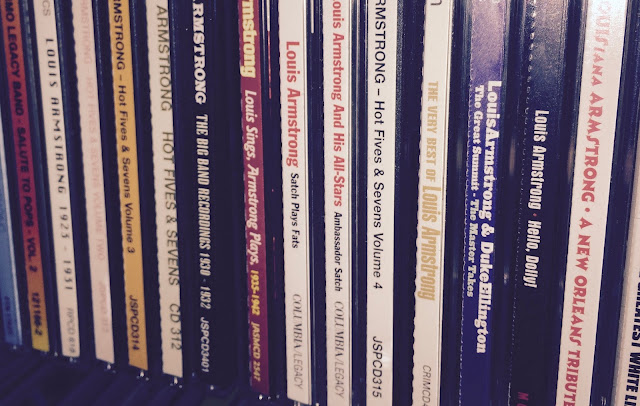 My obsessive-compulsive tendencies compel me to think twice before queuing up compilations of irreproachable music by the likes of the Carter Family, Coleman Hawkins, Billie Holiday or Django Reinhardt.  Their timeless works tend to send me down unproductive rabbit holes.  It was with great reluctance, consequently, that I played the first of 136 tracks on the new Louis Armstrong collection The Complete Decca Singles 1935-1946.  I was out of commission for the next six hours and 38 minutes.  Oh, but what glorious waste of time!  Armstrong was such a genius that his interpretations of extremely problematic material, culturally insensitive compositions and pure drek are just as compelling as his classic works.  And when it comes to Armstrong, too much isn’t enough.


---
I reviewed a concert by RL Grime, What So Not, Graves and Longer Days at the Midland theater for The Kansas City Star.

---
I reviewed a concert by Primus and Clutch for The Kansas City Star.

---
I reviewed a concert by the Harlem Quartet at Plastic Sax.

---
I featured Bloodstone in my weekly segment on KCUR.

---
I don’t think any album in my old man’s regular rotation annoyed me more than Glen Campbell’s 1969 release Live.  It opens with a over-the-top medley.  The second track is a corny rendition of “White Lightning.”  My whiskey-drinking dad would mimic the vocal effects.  I never got past it.

---
Howard Husock, the father of Eli “Paperboy” Reed, has written a fascinating account of his fleeting relationship with the late blues man Fred Davis.  The Kansas City native was killed in Cleveland in 1988.

---
I admire all of the genre-shattering impulses displayed on Paul Jones’ Clean.  His version of jazz is RIYL Philip Glass, chamber music, David Binney.

---
I’m annoyed (and a bit embarrassed) that I immediately fell for Forq’s new album Thrēq.  The quartet melds the most appealing (and dorky) elements of prog-rock and jazz fusion.  RIYL: Brand X, imaginary soundtracks, Bob James.

---
Damn hippies!  Power of Peace, a collaboration between Carlos Santana and the Isley Brothers, is far out.

(Original image by There Stands the Glass.)
Posted by Happy In Bag at 1:49 PM

When Wichita Lineman was first released it hit a chord with a lot of us; homesickness, doanchaknow? But, like WHB back home, AFN so played the hell out of it I quickly lost my fondness for it. The rest of his stuff never resonated with me.