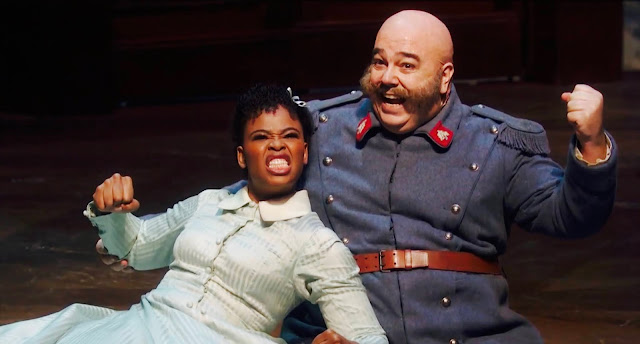 I visited the Grand Ole Opry in Nashville years before I attended my first opera production.  Raised on Waylon and Willie rather than on Puccini and Rossini, I didn’t hear opera as a child.  I’ve grown increasingly self-conscious about my ignorance of the form with each passing year.

When the Metropolitan Opera beneficently opened its archives to encourage patrons to remain quarantined during the pandemic, I reckoned it was time to get educated on the cheap.  (Tickets to the opera’s weekly live broadcasts are ordinarily $25.)  The free streams represent an attractive substitute for my compulsion to take in live music several nights a week.  Committing to a lengthy opera has a way of ordering an evening.  (The remarkable forbearance of my quarantine partner should also be noted.)

I enjoyed Gaetano Donizetti’s “La Fille du Régiment” on Monday, June 29.  It was the 100th opera I watched in 100 days.  The romantic comedy went down easily.  Having taken in plenty of Donizetti in the past three months, I was perfectly attuned to the opera’s cadence and flow.  And I knew from recent experience I’d delight in the performances of the young stars Pretty Yende and Javier Camarena.

The process wasn’t always painless.  I wondered what I’d gotten myself into back in March.  Even though I’ve attended seven or eight productions since seeing my first opera in 2010, the operatic rituals and format remained foreign.  As I suggested last month, opera’s high body count, unapologetic lustiness and preponderance of drinking songs kept me in the game.

I’m not giving anything away by pointing out the moldy fustiness of too many productions.  Not only does the sight of a powdered wig sap my spirit, the inherent dorkiness of opera nerds- please slap me if I ever utter the exclamation “toi toi toi”- is insufferable.  But I like challenges.  Powering through all four hours and twenty minutes of Hector Berlioz’ “Les Troyens” and every bit of Richard Wagner’s  three-hour and 43-minute “Lohengrin” made me feel invincible.

Moments of transcendence compensate for the frequent bouts of tedium.  “Salome” altered my consciousness.  I felt the heavens open during Philip Glass’ “Akhnaten.”  And I feel better about my time on earth having seen Leontyne Price in “Aida,” Luciano Pavarotti in “Tosca” and Joyce DiDonato in “Cendrillon.”  Becoming conversant in “Le Nozze di Figaro,” “Turandot” and “La Traviata” also made me a significantly more informed consumer of popular music.  With all due respect to Irving Berlin, Stevie Wonder and John Legend, Mozart, Puccinni and Verdi did it first.  But let me be clear: my newfound expertise elevates rather than diminishes my appreciation of less rarified forms of music.

What happens when the epidemic ends?  I can’t readily afford nice seats for productions at the Lyric Opera of Kansas City, let alone at the Metropolitan Opera and the San Francisco Opera.  And my closet doesn’t contain much in the way of formal wear.  Even so, I won’t be intimidated even if I wear jeans and a t-shirt while sitting in the uppermost balconies at opera houses.  I’ll almost certainly have taken in more (virtual) operas than any member of the audience.

Until then- and as long as access to the operas continues- I’ll keep learning.  I’m alarmed by how much I loved all four hours of the ‘80s-tastic production of Wagner’s “Die Walküre” (opera #101) last night.  Valhalla!  Incest!  Predeterminism!  Valkyries!  I’m bracing myself for tonight’s showing of Dmitri Shostakovich’s insanely freaky “The Nose.”

(Screenshot of Pretty Yende and Maurizio Muraro in the Metropolitan Opera’s production of “La Fille du Régiment” by There Stands the Glass.)
Posted by Happy In Bag at 10:52 AM